After finishing up my business in Boston, I took the Acela train down to Washington, DC. What a civilized way to travel! Six and a half hours of peace and scenery. I watched the morning sun glitter on the Atlantic Ocean. I spotted a great blue heron standing among reeds, and a young eagle flying with a wriggling fish in its talons. And somewhere along the way, I pulled out a pair of socks to work on. 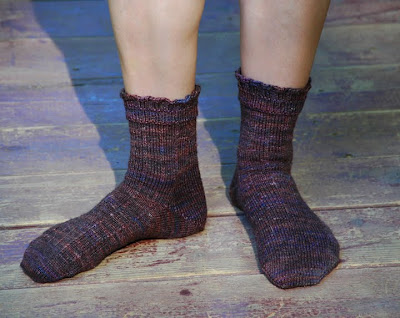 The socks are improvised toe-up socks with slipped stitches, short row heels, and two variations of ribbing at the cuff. Yarn is Fleece Artist Sea Wool in "Midnight." They're for my sister.

These were the infamous socks that I'd started on the trip to India. I worked on them everywhere, even while riding a camel, but I most associate them with our epic overnight train ride from Jaisalmer to Delhi. By that point, I'd finished one sock and was at the heel of the second. But I could not for the life of me get that damned heel right. 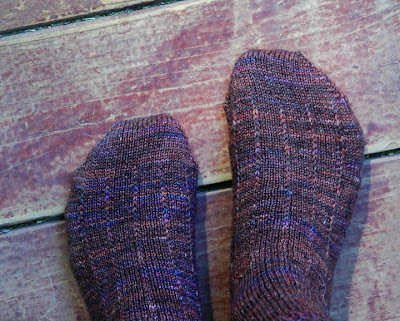 I was knitting in bad light, in motion, with a hungry stomach, a caffeine-withdrawal headache, and frayed nerves due to horrible and unpredictable train delays. I kept making mistakes that I wouldn't catch until hours later.

By the fourth time that I had to rip out the heel, I burst into tears and banished the socks to the bottom of my bag. It was, shall we say, not my best moment. It's taken months to work up the courage to pull them out again. But now you know why it was fitting to re-start them on a train trip and why I'm so relieved to have them finished. 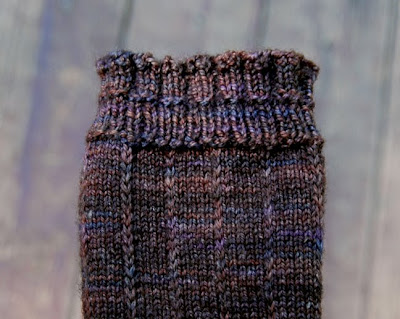 Do you know what I realized as I was sewing in the ends? The parallel lines of ribbing at the top evoke train tracks for me. It's a subtle reminder of the journey made by these socks.

And keeping in the poetic train vein, have a listen to Feist + Ben Gibbard's haunting version of Train Song. My sister introduced me to it some months ago for us to sing together, and it's been running through my head as I wrote up this post.
5 comments:
Labels: Finished Objects, travelogues

I'm back in Boston this week. It's been splendid: the hustle and bustle of the city, the scent of lilacs and lily-of-the-valley, good friends, greenness. Loveliest of all, on Sunday I got to visit Claybrook Farm and get a dose of rural New England perfection. 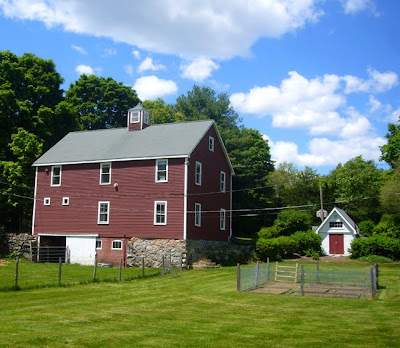 The farm is owned by my friend's aunt Charlotte, who has a fantastic quilting studio in the 18th century barn. It was such a pleasure to see her artistry and craftsmanship, not to mention the most incredible fabric stash you've ever seen! I wish that I'd taken photos of her work to show you, too, but pretty soon you'll be able to see some of them on her new blog, Claybrook Farm Quilts, which we set up while I was there.

They also keep a small flock of Shetland lambs. There's "Patches" leading the charge downhill, and later captured competently in Emaline's arms. I got to snuggle a little lamb, too, but I realize now that I was holding it as if it were a cat. 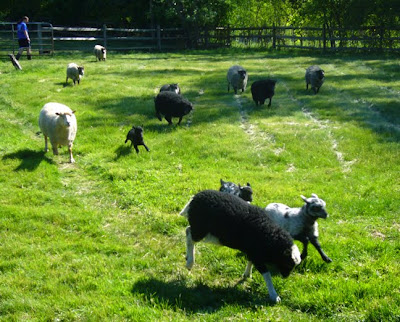 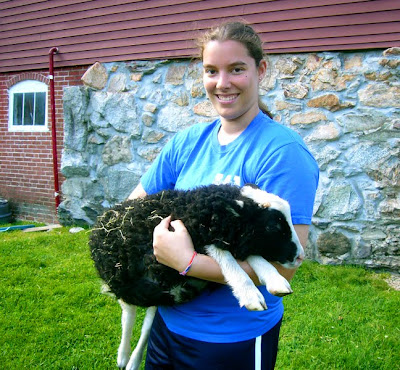 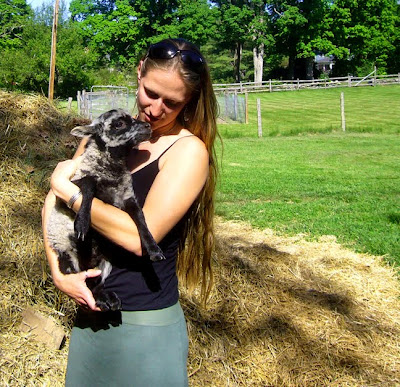 We got a real kick out of the chickens, too. Even got to catch some of 'em! 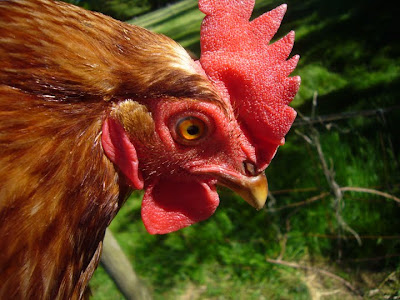 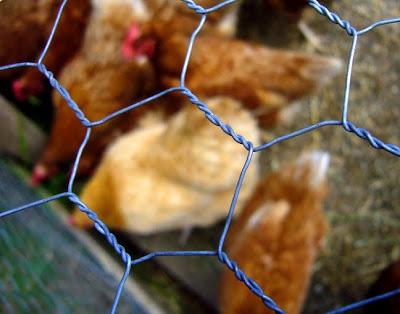 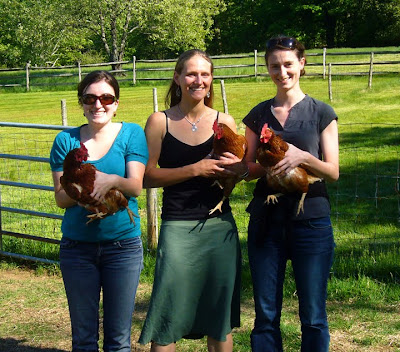 Both of these dear friends are knitters, by the way. My friend on the left is the one who taught me to knit while rambling around Peru during college. Someday I'll tell the story ... maybe on my 10-year knitting anniversary next year.
3 comments:

I had a bit of yarn left over from the Katarina Cardigan. Would've been such a shame to waste it. Inexplicably, I decided to make coasters. 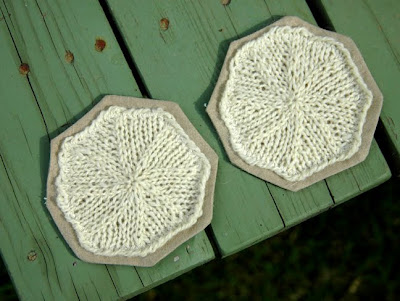 I cast on 8 stitches at the center and worked my way outwards on double-pointed needles, increasing 8 stitches every other row. I was hoping that it would smooth into a circle, but with such a small piece of knitting, the corners of the hexagon stand out. 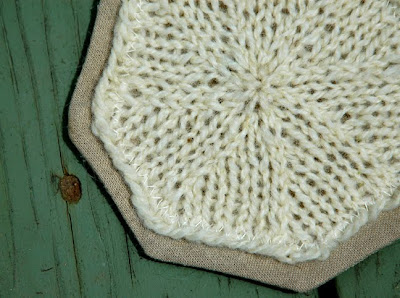 For the backing, I used a few scraps of linen fabric, left over from my Cro-Magnon dress. I traced out the blocked hexagons, added an extra inch or so, sewed around the edges, turned right-side out, and zig-zagged the knitting on top.

Here's what it looks like on the bottom. I'm digging the wonky thread tension. Gives it a wabi-sabi quality. Makes me want to run my finger along it. 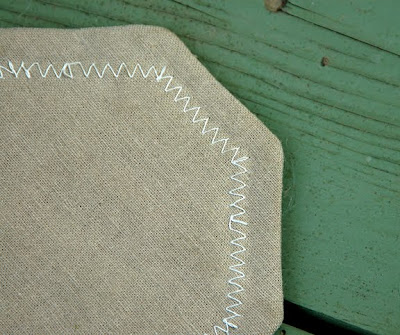 I like these coasters well enough, but I have to say that they took a stupid amount of time considering how small they are.
2 comments:
Labels: Finished Objects 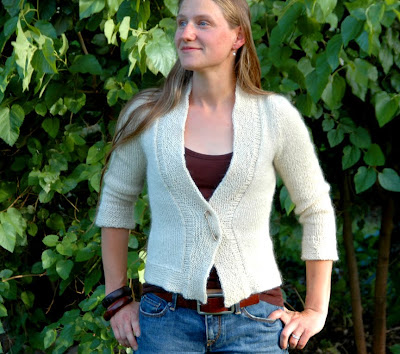 Basic details: based on the Katarina Cardigan by Cocoknits. Knit on size 6 needles in my Spring 2009 share of wool/mohair yarn from Juniper Moon Farm. I modified the heck out of this garment -- gauge, sizing, armscye depth, sleeve cap shaping, waist shaping, border stitch, collar depth -- but I think it was worth it to get the fit that I wanted. 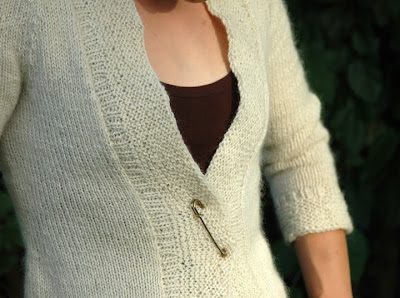 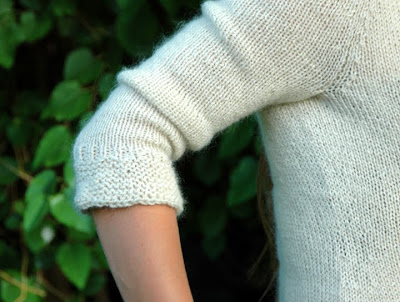 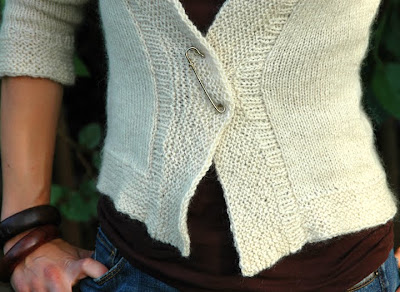 That said, it was quite a saga, with much gnashing of teeth and tearing of hair along the way! Let me remind you ...

On a lark, I cast on in February. I finished the main body by early March, but the edging was not to my liking and I had to cut it off and re-knit. I finished the collar by mid-March, but I didn't like how it flared and had to re-knit it as well. I slogged through the sleeves by late March. And then it took me a month to knit the sleeves caps nearly a dozen times until they were right. 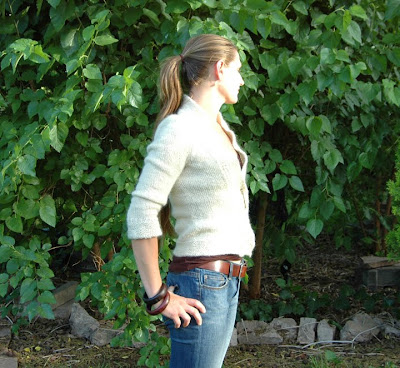 But I'm happy in the end. And I don't even care that it's finished in time for 96 degree weather .... I'll pack it away in lavender for the summer and look forward to wearing it come autumn.
7 comments:
Labels: Finished Objects

It was a weekend of unseasonably mild weather before the summer heats sets in.

An old friend blew into town, and we had a brilliant day hiking up the Peralta Trail in the Superstition Mountains. Here's the view northwards to Weaver's Needle: 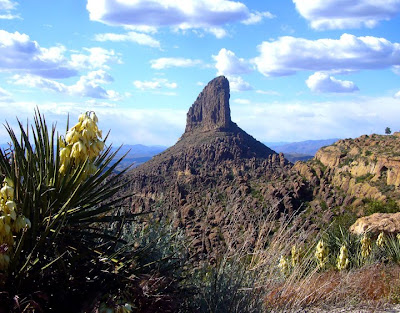 My favorite desert flowers -- ocotillo, yucca, prickly pear, cholla, brittlebush - were out in force, shimmering in the harsh sun in vibrant hues of orange and yellow and magenta. It amazes me that such an unforgiving landscape can produce such delicate and ephemeral blooms. 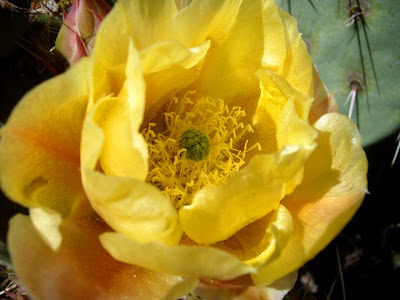 I had yarn and needles tucked into my backpack. I always do. This was to be a Vermont shawl, which I need to test knit in a commercially available yarn before I can release the pattern. I was trying out a sportweight alpaca in heathered greens. I worked on it throughout the evening, too, but I decided I didn't like it in this heavier weight, so I unraveled it after all that. 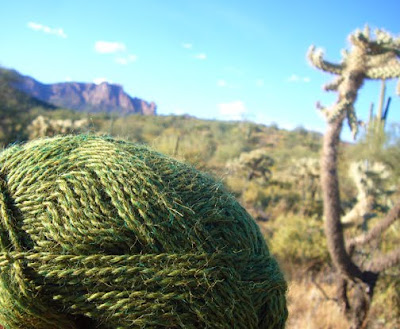 No matter. That was a minor point to the day. I was just happy to be out there, drinking in this beauty. 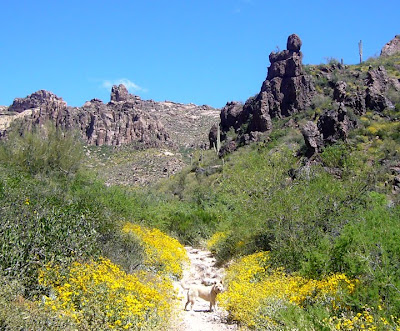