Wow. The last two weeks have passed in the blink of an eye. I've been sitting on this post all this time, weighed down by the burden of a deadline, never having the time to work out the words.

And what an adventure to share! For New Years, we drove west, west across the desert to celebrate the turning of the year in Joshua Tree ... 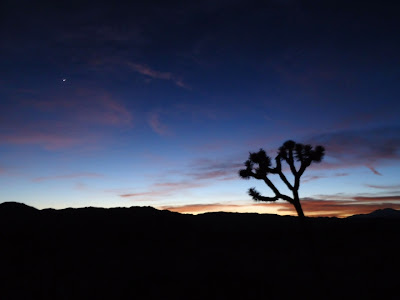 to bask in the sun, work our muscles, feel fingers on rock ... 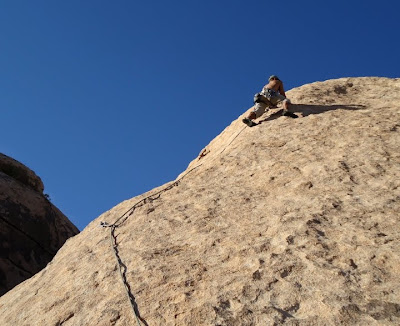 That was Mountain Man, of course. And here's me, with my handknit, scarlet Cliff Dweller chalk bag: 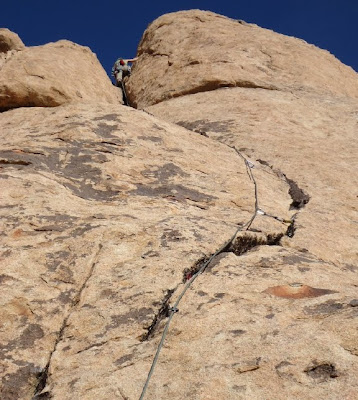 We had plenty of sweet, quiet downtime in camp, too. 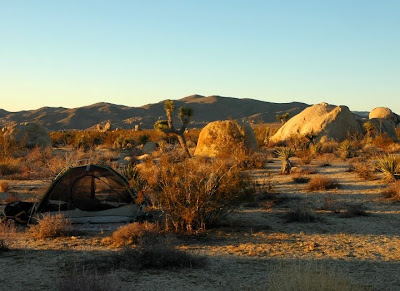 And on New Year's morning, I finally bound off the Shelter Scarf. Ta-Da!! 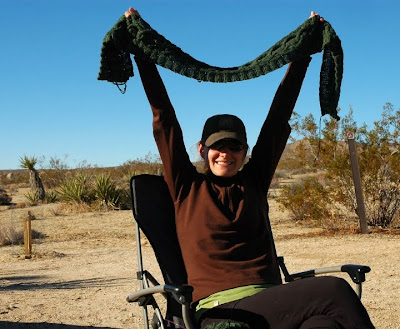 Very pleased with myself. I think this scarf is so damned cool and clever. 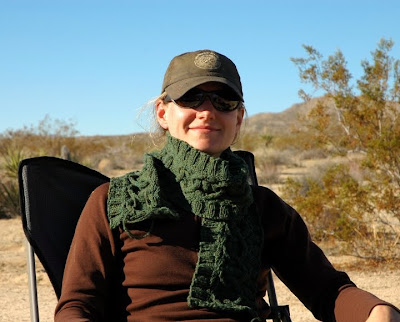 It's knit lengthwise, from one ribbed edge to the other, using horizontal cables that form interlocking circles. 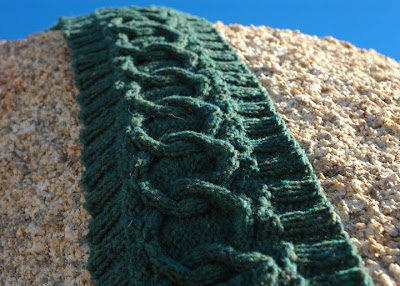 Pattern to come ... someday. I have plans. But it'll be a while, I reckon.

Anyways, one more knitting anecdote from this glorious weekend. By the end of the weekend, I was worn out of climbing and intense sunshine. So while Mountain Man and his friend climbed one last hard route (Bird on a Wire -- they're tiny specks in the middle by the dark spot): 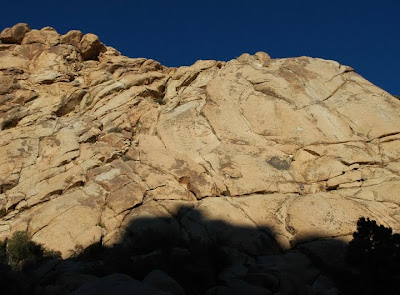 My friend and I stayed in the cool shadows of the valley. And I taught her to knit: 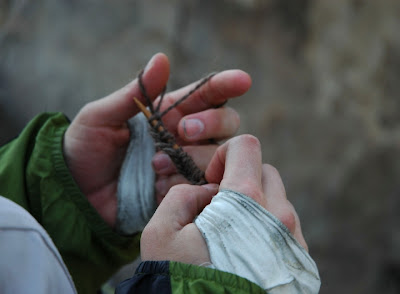 This is the beginning of a scarf story. It begins with a ball of yarn. Brooklyn Tweed 'Shelter' in Button Jar, to be exact:

Actually, truth be told, it starts much earlier. Years back, in my pre-blogging days, I knit my father a cabled scarf for Christmas in soft, tweedy, pea green wool. At the time I wasn't even sure if he'd wear a scarf! But he loved it and wore it faithfully through many cold New England winters.
All good garments run their course, though, and this year it was time for a replacement. At first I set out about carefully reconstructing the original scarf. But this turned out to be impossible. The original yarn (Queensland Collection Kathmandu) had been discontinued. I couldn't find anyone on Ravelry who was willing to sell their stashed yarn to me, and the closest substitute turned out to have also been discontinued. So, I decided to try out Shelter, which is a remarkable yarn, woolen-spun in an historic New Hampshire Mill.
And try it out I surely did. I had to swatch nearly an entire skein of yarn before I figured out what to knit with it. 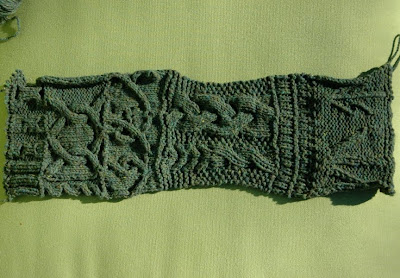 See, Shelter is a woolen spun yarn, which means that the fibers are all whipped up rather than aligned. It gives the yarn an amazing, lofty, pebbled texture. It's such a tactile pleasure to knit and wear, but it also brings challenges for cables or colorwork because you lose a lot of stitch definition.
Dad's original scarf (based on what I can reconstruct from photos) was knit in horseshoe cables and seed stitch in a sportweight yarn. It was understated and gentlemanly. But those slender cables and delicate seed stitches seemed to be swallowed up in the dark sproing of Shelter.
And that's why I ended up endlessly swatching, because I was putting this yarn through its paces, getting acquainted with it and learning about what did and didn't work in it. It was a fascinating process, but it gobbled up so much time that I couldn't actually finish Dad's scarf by Christmas. All he got was a narrow strip of fabric, all bunched up on my needles. It looked more like a snake than a scarf! 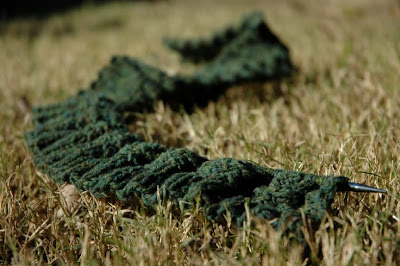 I'm nearly done by now, though. I worked on the scarf all through the Christmas weekend. Here I am, knitting in the Phoenix sunshine, with Isis snoozing in the grass behind me .... 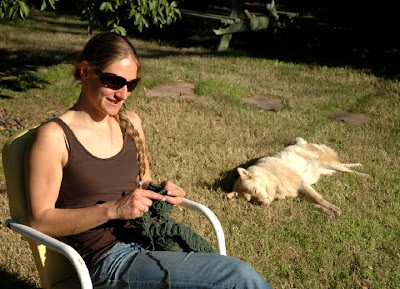 To see what I ended up with, you'll have to wait for Part II of the story ....
3 comments:
Newer Posts Older Posts Home
Subscribe to: Posts (Atom)