My friend Amy has a terrific green coat with purple embroidery, but she never wears it because she doesn't have the accessories to match. I went stash diving a few days ago to find the perfect purple and sage yarn (Lamb's Pride, 'chianti' and ??). I concocted a horseshoe lace pattern to reflect the undulating lines in the embroidery. Both Amy and her cat Cosmo seem to like it! 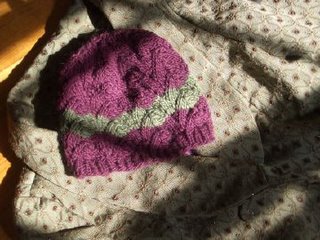 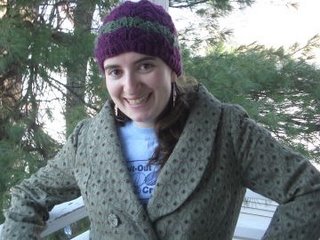 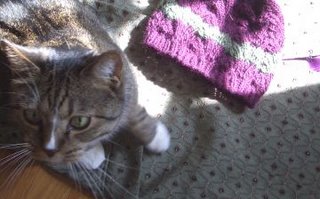 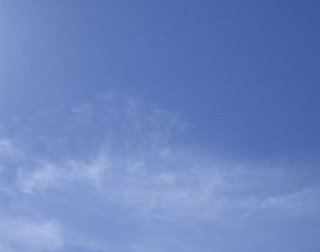 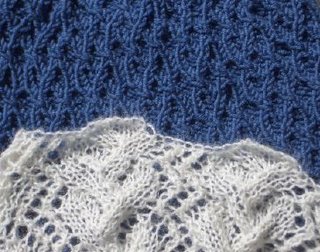 You can all breathe freely now. Shedir is finished, in all her cabled glory. And the wedding stole is growing merrily (in no way was the above photo symbolic of it clouding my existence - to the contrary, I'm greatly enjoying the yarn and the pattern). Here's the cabled glory: 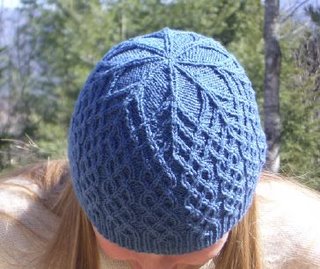 Here's a happy me, showing off my new spring cap, at Mountain Man's house.

I spent most of the weekend in an academic conference, and so it was with a great sigh of relief and happiness that I sat down to knit while watching a movie last night. I worked steadily, and soon found myself giddily approaching the last two stitches of the hat.

But somehow I knocked one of them off the needle. And away it slid, always just ahead of my ability to pick it up. I’m usually a champ at fixing mistakes like this. Maybe it was the yarn, or the awkward way that dp needles twist when there are only a few stitches left on each, or the fact that the top is mostly purled stitches that bent away from my needles. In any case, my near victory was turning into a nasty downwards spiral.

Mountain Man had to stop the movie, turn on the lights, and duck out of the room. And I’m telling you, it took every ounce of self-restraint not to rip out EVERY LAST STITCH of that hat!!

My sister would argue that I usually get upset when I make a mistake. But it’s not like this. Typically I will let a project with mistakes languish untouched for months before I can bring myself to unravel even a few inches. And when it’s something that I really want to finish, I can steadfastly bit the bullet (the night before, I’d tinked back an inch and a half of work on this very project – placidly).

I can’t explain what came over me. Shedir had a close brush with death by unraveling. But in the end, after Mountain Man brought me a glass of wine, I was able to let it pass. And I’ve been sitting in the sun trying to make sense of it this morning.

Here’s the photo from last week, when it was a little smaller but as yet untouched by this drama. 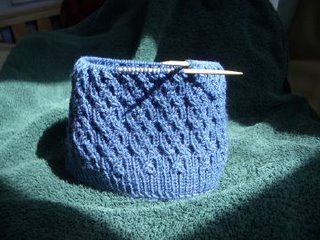 Back in the saddle again....

I fell off the lace horse, but I've swatched and I've sketched and I've cast on again, ever hopeful. Print o'the wave emerged victorious, based on a poll of my close friends. One of my fabulous bridesmaids, currently an architecture student, had this to say about the swatch: "the pattern shows very clearly, and I like the "slippage" as we call it in the architectural world-- the push and pull / altering branch pattern." Love this concept of "slippage."

I cast on last night and happily breezed through a few rows. With so little to show, however, I thought it needed the darkest and most dramatic background... so I tried to lay it against my tranquil, sleeping kitty cat. 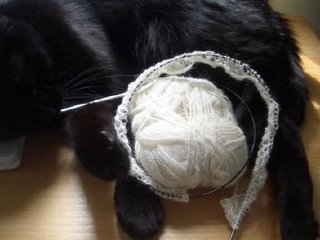 Immediate danger! Within seconds she awoke to bite the needle, as pictured above. I should've known better. Here's the destruction she wrought the other day, when I was foolish enough to leave my lace swatch and yarn on the couch. 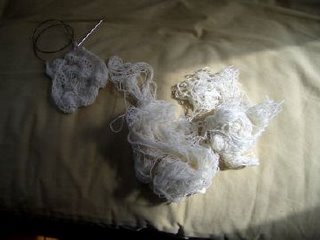 And in other news, Shedir is progressing steadily. But for some reason, I can't get the picture to post.
No comments:

I spent last evening swatching for my wedding shawl. Ran out of steam before getting to the trellis lace pattern (that's what I was trying before). I'd swatched that over the weekend and wasn't wildly impressed, so I tried to explore alternatives. Yarn is Misti Baby Alpaca laceweight. Needles size 3 Inox circs.

"Feather and Fan" --- Unbeareably granny-like in this yarn (no offense to the grannies out there, but it's not quite the image I want to project on my wedding day). I could barely get through a mini-swatch

"Horseshoe Lace" --- Much more appealingly defined. But maybe not quite open enough for my purpose.

"Vine Lace" --- Chaotic. I've loved this pattern in heavier yarns, but it gets lost in this laceweight.

And here's a quick shot of all four in a row, just for size perspective. 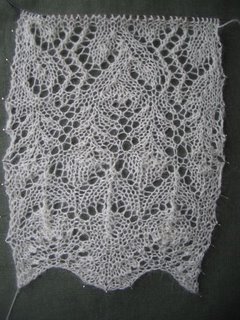 Unsurprisingly, I started another hat this weekend. Couldn't bear the thought of diving back into lace (although I did swatch on a much better pair of needles). 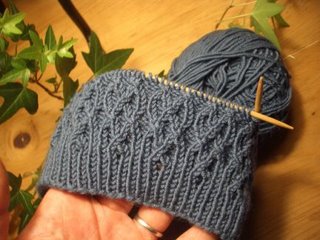 Any guesses? It's another Shedir! The yarn is an unnamed wool-cashmere blend that I picked up on a lark from a yarn store sale bin a few years ago. It's scrumptious. Unbelievably soft, springy, and sky-colored.

In terms of what this reveals about me psychologically: I think that I always want to have a hat going on circular needles. When the going gets tough with other projects, it's wonderful to have a fallback project to lift ones spirits.
No comments:

This is Strike 1. Look carefully. Late one evening, I knit the wrong row. 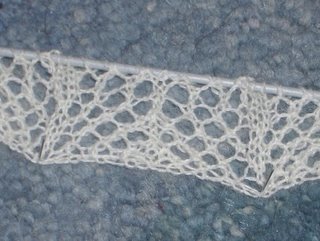 I only realized this after another forty minutes of knitting, dammit. It'd take so long to tink it back and fix that I decided to rip it out entirely. It wasn't doing it for me anyways - those long, heavy needles, boring stitch pattern, infuriatingly slow progress. Am currently evaluating my next step - slightly larger needles, circular this time? new pattern? I will be eagerly reading Eunny'slace series for tips...
No comments:

Soon to become the bane of my existence

I desperately need to train myself to be a faster lace knitter.

In my precious free evening last night, I started the trellis lace wrap (still trying to decide on whether I'd prefer Eunny's beautiful shawl, but that's another story). The verdict? After two hours of knitting, this is all I had: 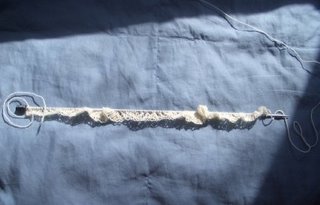 I don't know if I can bear to admit it, but it's only half an inch!! Admittedly that did include time for casting on and counting, counting, and recounting the number of stitches. But at this rate, it will take me 400 hours to finish this shawl. And it's not like a hat, that I toss into my bag and can mindlessly knit anywhere. This is 400 hours of seated, concentrated knitting.

I don't think I can finish by August. I'm afraid by the time I finish this, it'll be just in time to be my death shroud!!
No comments:

Hats are truly my favorite thing to knit. They're a great platform for experimenting with yarn, textures, stitches, shapes. Low risk, rapid results. Over the last weekend, I finished up two. I made up the patterns on the fly, which means that neither turned out precisely as I would've dreamed. But I'm rather pleased with the results all the same. 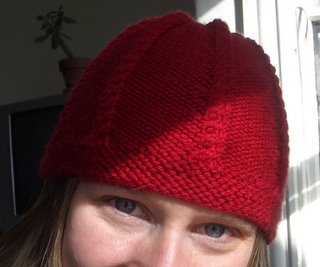 This yarn is yummy! Shows cables deliciously well, and it's a pleasure to feel running through my fingers. 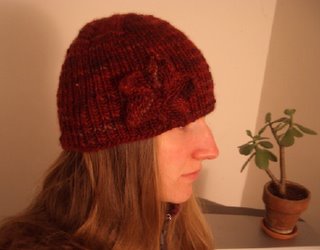 I experimented with a top-down pattern in this one, partly because I wasn't sure how long the yarn would last. Knit in stockinette at the top, then switched to ribbing (I prefer the look of a variegated yarn in ribbing, for some strange reason). When I made this again (which I will, because I love the yarn and really like how this hat feels on my head), I'll knit from the bottom and rib the entire hat. And I'm terrifically happy with this spunky star-flower! 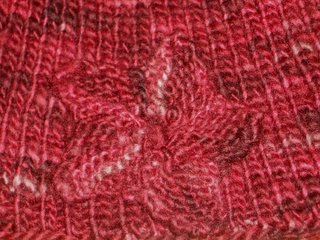