This country is beautiful, folks. I still believe that Vermont is the best place on earth, but I truly was enchanted by all the places we drove through. Our route ran through the Adirondacks in upstate New York, into Ontario, across the northern shores of Lake Huron, through Michigan's Upper Peninsula, across the top of Wisconsin and the middle of Minnesota, straight through the North Dakota, cutting across the southeast corner of Montana, down the spine of the Rockies through Wyoming and Utah, and then down into the deserts of Arizona. And here's what I knit (remember, my theme was to finish or re-knit long-languishing projects):

Project 1: Organic Cotton Baby Blanket
The blanket was knitted up when we left, but I'd been procrastinating on all the ends I had to sew in. Here it is, in Hanover, NH just as we started our drive. My Dartmouth readers will appreciate that Baker Tower (in the background) was chiming the alma mater as I took the photo 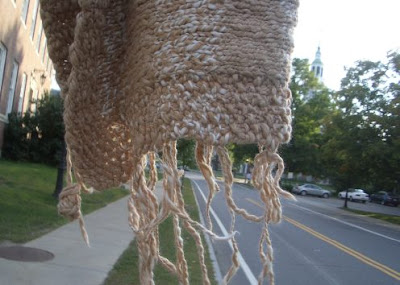 On the first leg of our journey, I made a matching baby cap. Here it's nestled on moss by the shores of Lake Eaton, in the Adirondacks. This was probably one of the most beautiful campsites of our whole trip. Crisp fall weather, forest trails, a secluded cove for dipping in the cool, fresh water. 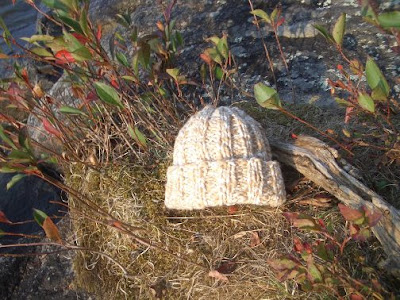 I didn't get to the blanket's loose ends until a few days later, on the Upper Peninsula of Michigan. We had a rainy morning, and I stayed in the tent weaving in the ends. Here's the finished blanket by the shores of Lake Superior. 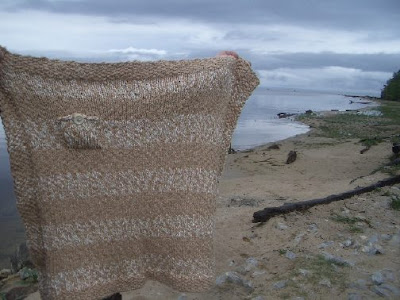 Project 2: Jaywalker Socks
These socks started out in July as experimental double-knit socks. I'd spent countless hours on it before I realized it was boring and ill-fitting. Here's that damn sock before I frogged it, on the road to the Algonquin Provincial Park in Ontario (it was raining out, so no pretty pictures of scenery). 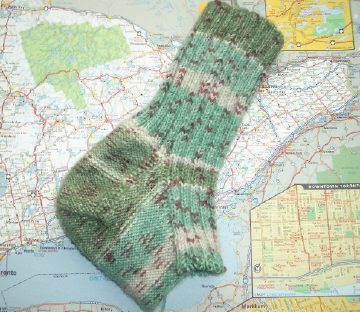 I frogged it and reknit it as a Jaywalker. Here's the first sock, in front of the red rocks of Moab. You might observe that it's a long way from Ontario to Utah. Yes, it took me very, very, unpleasantly long to finish this sock. Also, my macabre side keeps seeing the red splotches as blood splatters. So the second one may never be done. 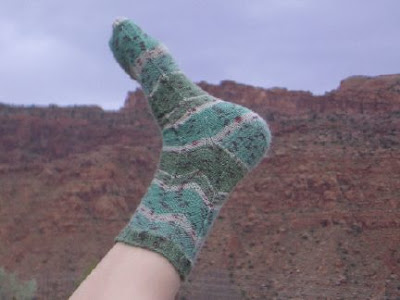 Project 3: Peppermint Stick Cap
This cap is meant to match a scarf that I made for my sister back in February. It was knit as a small clapotis out of wool yarn (Henry's Attic Licorice Twist) that I'd dyed with cochineal. The hat started of as Interweave's top-down tweed beret, but it looked hideously busy in this marled yarn. And when I'd tried to wing it on my own, it ended up as a gigantic, round mat (diameter=1 foot -- it had been all squished onto a 12" circular, and I hadn't quite realized how huge it was). I hadn't touched it since March, and here's what was like at when I pulled it out of my knitting bag in Wisconsin. 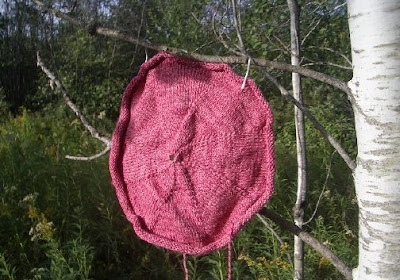 There was no salvaging this monstrosity, so I frogged it and started it again as a simple cap. It was halfway done by the North Dakota badlands. Here's my morning knitting spot behind our campsite in Roosevelt Park. I have to say, both Isis and I were in heaven here. I was happy for the lovely, cold weather, because it meant I could don my Cambridge watchcap. Isis was happy because of all the wild animals that she could see and smell. In fact, when we drove by a bison rubbing up against a tree, she whined to get out of the car to play with it! (Fiber note: I did go back to that spot to see if it left any fur behind; it did not, but I found some later in Yellowstone.) 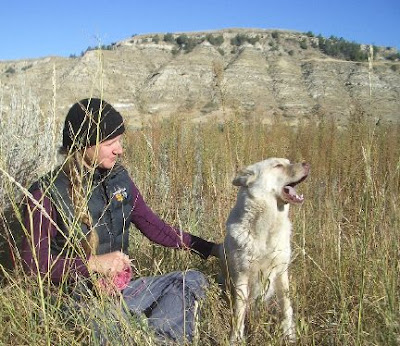 Anyways, I finished the hat when we were near the North Dakota-Montana border. I have to say that I loved North Dakota. I found the landscape -- the subtle roll of the land, the golden fields, the sculptural hay bales -- totally entrancing. It was so much more beautiful than I ever would have expected. 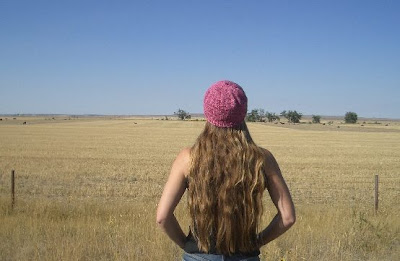 Project 4: Cabled Baby Sweater
Several years ago, I bought this lovely soft merino yarn. Twice, or maybe thrice, I started a mistake rib scarf. But it wasn't worth all the work that it takes to make a long scarf, and it had been sitting, abandoned, for at least four or five years, untouched. Here is the yarn and partially-knit scarf as they looked in Red Lodge, Montana, when I pulled them out for frogging: 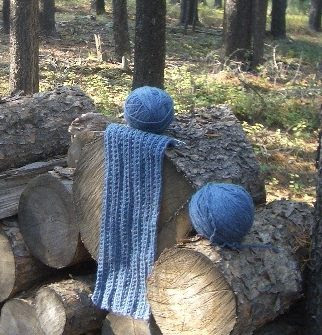 I decided to use the yarn for a baby sweater, loosely based on two that I'd made last year: the child's placket sweater and the bookworm sweater. The cable from the latter is fun and impressive-looking, but I wanted to adapt it to knit in the round, with an open neck. I'd finished the lower body by the Grand Tetons in Wyoming. 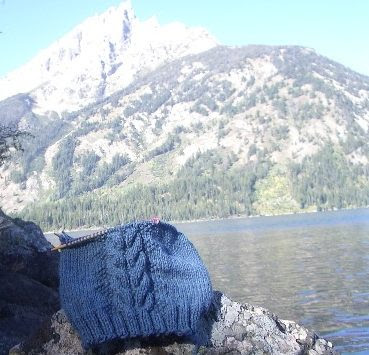 The sleeves and neck were finished by the time we got to Phoenix. Here it is, resting in some cacti in our back yard: 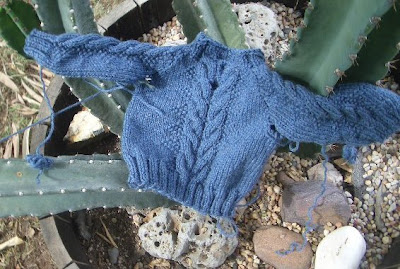 I plan to sew up the seams this weekend, and then I'll take it out to one of the mountain preserves to photograph it with a saguaro.

And that's it! With all the scenery to distract me, I guess I didn't manage to knit as much as I'd hoped I would.

But I'm back in business in Phoenix now, and I'll be getting all caught up with everything soon enough!
9 comments:
Labels: Finished Objects, travelogues

The winner of the blog contest is....
Sarah Dow! She had excellent ideas for both knitting and car games. I emailed and got them explained, and I hope she doesn't mind if I share them here:
"In the Minister's Cat you have to describe the cat using all the letters of the alphabet (i.e. The minister's cat is an angry cat). You set up a rhythm and if you fall out of rhythm or reuse an adjective then you're out. Horses, Cows, and Cemeteries is best for sideroads. You call out any horses or cows that you see to collect points (1 point for cows, 2 for horses) and if you call a cemetery it wipes out the other player's points. First person to 50 points wins."

And as for my travel knitting: I decided to come up with a theme of finishing up loose ends in my knitting basket. I have a whole bunch of projects - hats, scarves, socks, etc, and I'd like to have them all finished up by the time I get to Arizona. This is what inspired me: 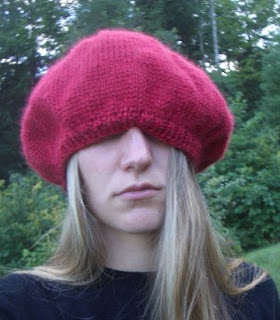 It was one of those hats that I'd started, blindly following a pattern, no swatching, no common sense. Pretty fetching, wouldn't you say?

But perhaps a bit inconvenient if you want to walk and wear a hat at the same time. I unraveled it and started again. In no time at all, it looked like this: 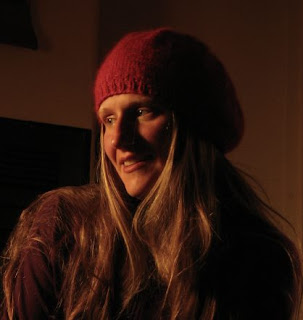 Yarn is Debbie Bliss worsted Alpaca/Silk, needles are 5's for the ribbing and 6's for the hat.
5 comments:

Quick reminder: one day left to enter the blog contest! I've washed and wound the vermillion laceweight, and I can't wait to send it out to a lucky winner ...

The real point of this post, though, is COLOR 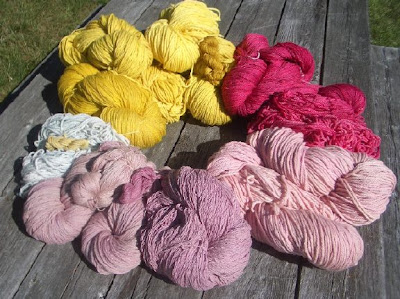 I've been dyeing up a storm, trying to finish up my dye materials before we leave (day after tomorrow now). I started off with the cochineal. It's fascinating to see the colors that, often surprisingly, come out of the pot. The darkest, most vivid color was at 12% WOF (weight of fiber) on silk/wool. In the second bath, the merino wool came out as a shocking fuschia, while the silk noil came out a dusty lavender (reminds me somehow of the early 1990's, though I can't explain why). Bulky wool exhausted the dye pot as a pale pink. 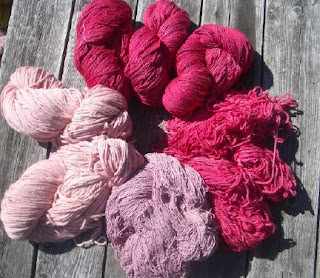 I've dyed with cochineal before, but this time I was especially conscientious about trying to extract all the pigment possible. I had previously followed Trudy Van Stralen's directions - soak the ground insects over night, then simmer once and strain. This time I followed the directions from Earthues - simmer with fresh water three times, then combine and soak over night. I did six simmers as an experiment. Here are numbers 2, 3, and so forth -- you can see that after the third bath, I was getting colored water instead of silky, dark dye liquor. Very interesting! If I'd only simmered it once, I would've missed out on a lot of dye. 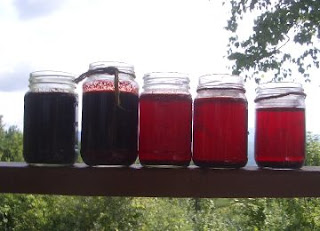 Now for the yellows. I started with this very, VERY large bouquet of goldenrod. 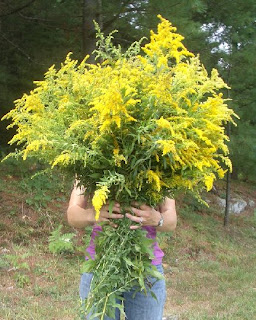 I dyed a very large amount of wool with this, but I still got intense, almost garish yellows. The top skein is superwash sock wool. The three darker skeins are wool from the first bath. The slightly lighter, warmer skein is wool from the second bath. The nubbin in the center was silk/wool dyed with marigold, which gives a much warmer, golden color but which is hard to collect in large enough quantities. 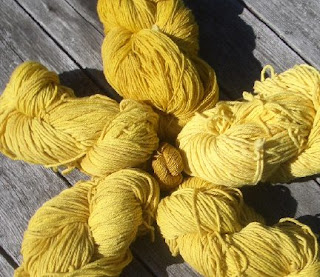 I also tried the rest of my indigo leaves -- again, it was an unmitigated flop. The wool turned a beautiful turquoise when I first took it out of the dye bath (left), but it faded to a dull gray-blue after an hour or so (right) 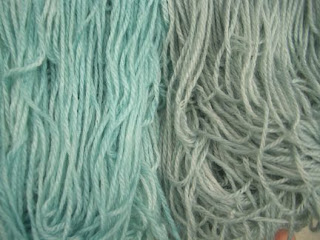 and then rinsed out to an almost imperceptible light blue. The leaves, boiled, gave me only an unpleasant yellow. I think I'm going to give up on dyeing with fresh indigo leaves. 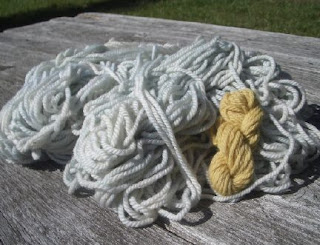 But then I closed out with a final, unexpected success!! For the last six weeks, I've been brewing an unspeakably revolting vat of orchil lichen and ammonia (following the instructions in Trudy Van Stralen's Indigo, Madder, and Marigold). It was as foul as foul can be, but it extracted a charming lavender dye. The small skein shows a sample dyed at full strength. The bulky wool and alpaca laceweight show more diluted colors - pale but very pretty. 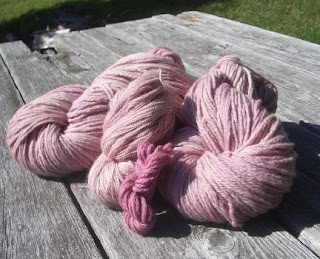 I'd started this post out with a vow to rein in my verbiage, but that vow had to be deleted. I have one more small post coming up tomorrow or Thursday to show a bit of knitting (I swear, I've been doing that too) and to announce a prize winner. See you then!
2 comments:
Labels: natural dyeing
Newer Posts Older Posts Home
Subscribe to: Posts (Atom)