This year I only knit two Christmas gifts: a hat for my sister and a neckwarmer for my mother. Both were small and simple but infused with deep love and affection. 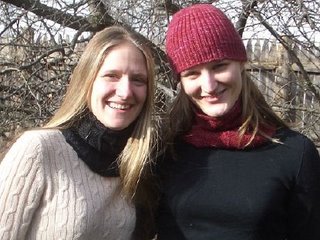 (That's me on the left, wearing my mom's neckwarmer, and my sister on the right, wearing her hat and smoke ring.) 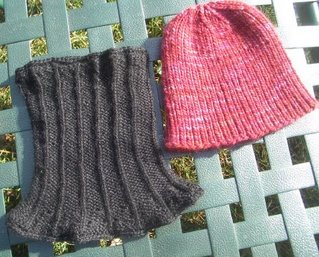 Neckwarmer details:
Knitpicks Elegance in color 'Coal,' under 2 balls, on size 7 bamboo circular. Can't recall the details, since I was winging it! But basically, I knit a {P5 K1tbl} tube, flared it a bit at the bottom with some yo's, then did a row of single crochet at the flared bottom and a double row of single crochet at the top to decrease curling.
1 comment:
Labels: Finished Objects

I haven't accomplished much in the last week. Cabled socks are at a standstill, since I turned the heel too late and am still too disappointed to rip it out. The bulk of my knitting activity was directed towards Christmas gifts, but this black blog is all I'm at liberty to reveal: 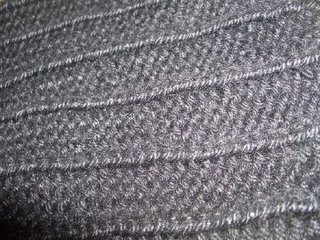 Mostly I've been up to yarn buying. Christmas has gotten me disturbingly consumerist, which is a state that I usually try to avoid. There's one funny anecdote about yarn buying that I planned to share, but I already wrote out the story once and then accidentally closed the window. I'll write it up again once the yarn arrives and I have an accompanying picture. 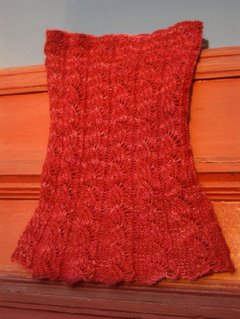 The lace smoke ring is a delight. Once I memorized the pattern, it was a meditative pattern to knit. It's a beautiful and unusual piece to wear, whether worn as a dramatic collar or folded in half and tucked under a jean jacket. And it was even pleasing to photograph, which I did today in the gorgeous, warm glow of the waning sun. 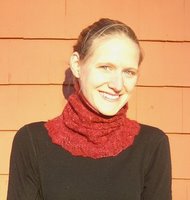 I departed from the pattern in three ways. First, the original pattern places a column of knit stitches in the middle of the sections that make the 'flare' at the bottom, which is to say in the middle of the breaks between the ribbed lace columns. I thought this looked messy and detracted from the lace, so instead I did straight purling for those breaks. You can see this best in the last picture. 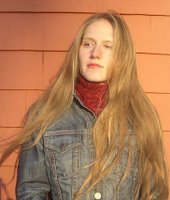 Second, I thought the double YO's were too open, so I did single YO's after the first repeat. This meant that I did a purl into the front and a knit into the back of that single YO, rather than using a separate YO for each. This did make the knitting a little more fiddly, but I was pleased with the tighter result.

Finally, since there was zero probability of this being worn like a hood, I shortened the final length to about 13.5".

There was a point when I wished I'd chosen another yarn for this project, something with softer and more luxurious fibers like alpaca or silk. But the yarn softened and bloomed a bit after a soak in Eucalyn. And when I put it on, I realized that I liked the look of the crisp, sturdy fabric, rather than something slouchy and draped.

Tomorrow I'll lovingly pack this up and send it to my sister, who has been waiting for more than a year for me to knit this. But I'm so happy with it that I'm almost tempted to frame this last picture, which is dusky and purple-toned from the very last gasps of the sunset. 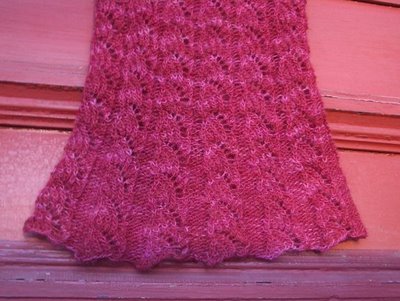 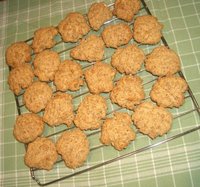 I'm waiting for a sunny morning to photograph the lace smoke ring, and in the meantime, here's a cookie recipe I whipped up this morning. They're meant to be a crumbly, textured, not-too-sweet cookie to dip into a cup of tea. Please let me know if you try it and tinker with it!


Cream the butter and sugar. Stir in vanilla. Beat in the eggs. Add flax seed, flour, cornmeal, and salt, and mix well (it will be a rather firm dough). Stir in pine nuts and rosemary.

Drop by the spoonful onto a greased cookie sheet and bake at 350 F for 20 minutes, until starting to brown on edges. Makes 3 dozen small cookies. 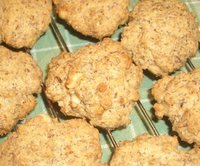 Those are the basics. I just made this recipe up, and here's what I'd do next time around: add more rosemary, pinenuts, and salt, coarsely chop the pinenuts, and maybe take them out a little earlier so that they're a bit softer. You could add more butter and sugar if you wanted it to be more or a standard, sweet and indulgent cookie.
1 comment:

I've no illusion that my works in progress are of interest to anyone else. In an effort to make them more engaging to watch, here's what they look like as movie themes

I. Lost in Lace

A story about persistence and finding one's way, focused on the flared lace smoke ring. I'm a mere four inches from finishing it -- oh, so close the goal!! -- but I lost my momentum, and seemingly my way, when I'd put it aside for a week. I think I'm back on track again. But we'll see what adventures come along to sidetrack me. 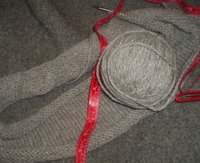 II. The Curse of the Gauge Dragon

A tragic and mysterious saga about the sweater for Mountain Man. The gauge is cursed, I tell you, CURSED! Take 1, the sweater gauge was dreadfully bigger than the swatch gauge. Take 2, I tried a different stitch and a bigger swatch, but the sweater still exceeded all predictions. Take 3 -- supposed to be the charm -- I measured off of the Take 2 sweater and expected perfection. But somehow now it's turned out too small! 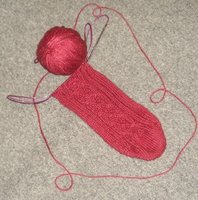 A sweet story of an Aran sock. It's a tale about growing up, trying new skills like toe-up socks and short-row heels, and eventually, hopefully, finding a true sock pattern to love. Plenty of predictable bends in the plot here: cabling, magic loop, and, very soon, a turned heel.

(p.s. In case it wasn't apparent, the movie names were plays on Lost in Space, Circle of Friends, and The Curse of the Jade Dragon)
1 comment:
Newer Posts Older Posts Home
Subscribe to: Posts (Atom)