When I was a kid, my sister and I were really into wild foods and foraging. We nibbled on dandelion greens, cattail tubers, staghorn sumac berries, wild wintergreen, etc. But we always had trouble with acorns. We'd collect tons of them, laboriously pry them out of their shells, and simmer them for hours upon hours to leach out the tannins. The problem was that we'd eventually forget about the pot on the stove, and all of our work would be charred.

This past weekend I was walking in the forest and realized that in the spring, the plump acorns on the ground were beginning to burst their shells (no squirrels in that part of the woods). I filled up my hat with acorns and easily shelled them on the remainder of our walk. Back at Mountain Man's home, I set to simmering them.

Here is the part that may interest you fiber fiends. The acorns simmered for probably twelve hours total, through nine changes of water. And every time the water came out a different shade, from milky, light brown to clear, steely grey. Seen below in order of boiling - first on the left, last on the right. What's going on here? Do different chemicals leach out at different times? 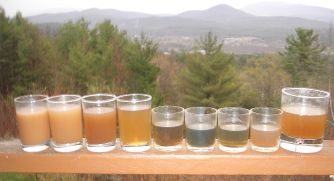 I was so terribly tempted to try dying some yarn in each cup, but possessed neither the time nor the ability (sometime I'll post about my last failed dying experiment, with foraged cochinealle bugs in Peru!).

Foodwise, the acorns were definitely less bitter, almost palatable even, after all that boiling. I plan on smashing them up and making pancakes with them.
No comments:

I turned the heel on my jaywalker sock this weekend. I'm really enjoying the pattern and the yarn, although I'm a bit concerned about its lack of elasticity. The fabric is pretty stiff, which makes it a bit hard to pull the sock on (over my heel, that is). Anyone else had that problem with the Jaywalker pattern or Trekking XXL yarn? Here's a snapshot - knitting in the car on the way down from Mountain Man's house this afternoon. 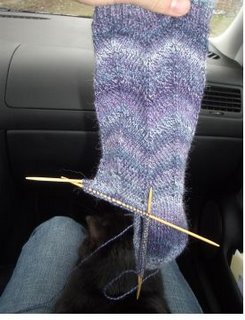 And what's that in the bottom of the photo? Let's zoom in... 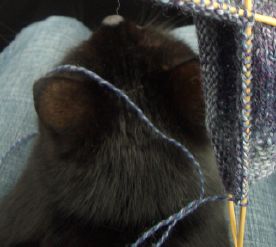 It's Leila! Awww, what a cute little nose.
No comments:

The allure of sock knitting

My happy side project is... a pair of jaywalkers! 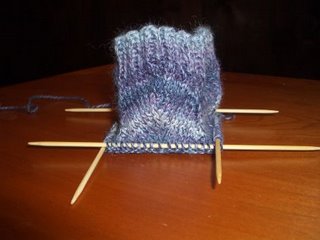 In Trekking XXL color 109, for my sister. I've never been drawn to knitting socks before, but I'm starting to understand the appeal. They're relatively quick to knit, incredibly functional, rich with color, and super portable! Oh wait, scratch the last point. I know everyone raves about what a portable project they are, but just take a look at the ol' ball and chain. 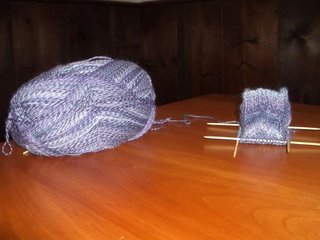 The colors of this yarn are making me smile though. Simple pattern, but I'm always looking forward to what colors roll off the ball next.
No comments:

The print o' the wave shawl grew heartily this weekend. Here she is: 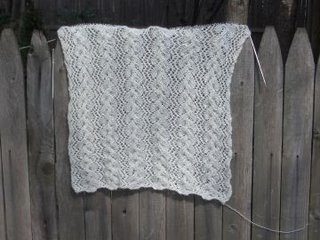 I think this will block out to about 20 inches, which makes it about a third finished. I'm tremendously pleased by the progress, and I like the shapes and textures more as the shawl grows. But I'll admit that I've started to reach saturation point. I need another project to break up the monotony.

I remember hearing that eating is most pleaurable if you alternate bites of the different foods on your plate. It keeps your taste buds sharp, brings out the contrasts in flavor and texture, helps you really appreciate the food. Knitting, for me, follows the same concept. Too much of one project dulls my appreciation and interest. So as happy as I am with this shawl, look for a new side project in the next few days!
No comments:

Progress, and a new animal

I've decided to stay the course, for the moment. I'm making good progress on the lace shawl, and I've realized that, until I try the dress on again in July, any new shawl would be beleaguered by the same uncertainty. Here's the current state of the lace: 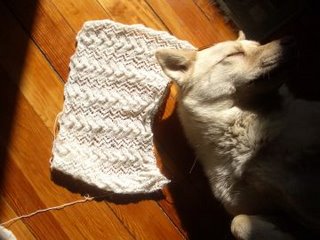 Note: the animal pictured above is Mountain Man's dog (husky-yellow lab mix, for scale). She was laying in the one remaining patch of morning sun and was kind enough to move out of the way a bit so that I could photograph my lace.
2 comments:

I had been blissfully progressing on my wedding shawl, until I received yesterday's mail. I opened an unassuming envelope and found a swatch of fabric for my wedding dress. I was actually excited that this was finally arriving. But to my horror, I lay the swatch against the shawl and realized
2 comments:
Newer Posts Older Posts Home
Subscribe to: Posts (Atom)