Thanksgiving. Traveled across the country to spend it with family, friends, and a Siamese kitten. 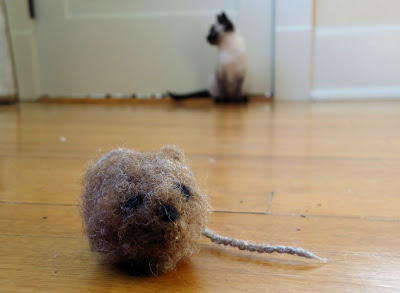 And he loves it! He's been thundering about the house with it in his mouth, playing with it constantly, biting a hole in it that I've already mended, growling cutely when we try to take it away from him, and mewing when he's lost it under furniture. 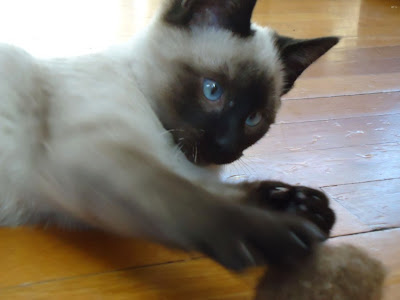 My favorite game is to dangle the mousie by the tail and watch him jump and jump at it. He's a first-rate leaper. 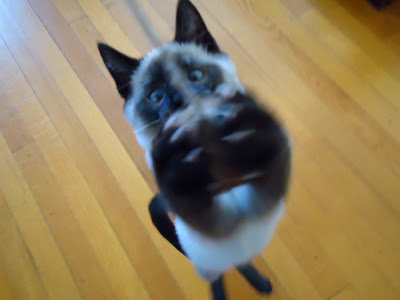 And just look at those beautiful blue eyes!! 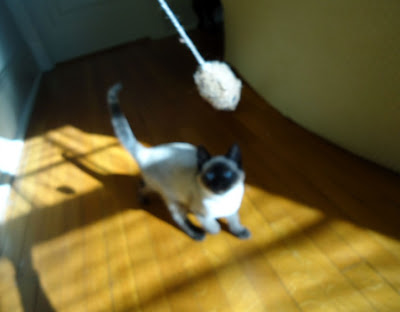 Late November. The desert is cooling down, with chilly nights and crisp days. I finished up my green Open Studio late last week (in Malabrigo on size 6's), and it was just the thing to wear during a cloudy day climbing in the Refuge. 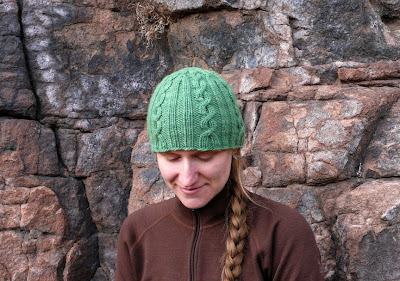 Isis had a good day, basking in the beauty around her. Such a sensitive beast. 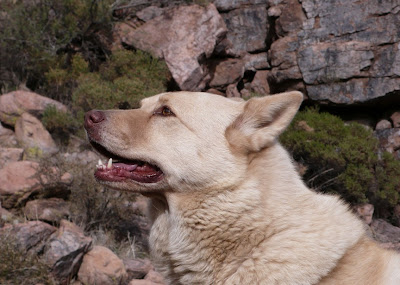 The knitting that I'd brought along was yet another Open Studio hat, in the same rich brown wool as Mountain Man's sweater. I thought I could cajole Isis into trying it on. She was a good sport as long as I was there petting and reassuring her .... 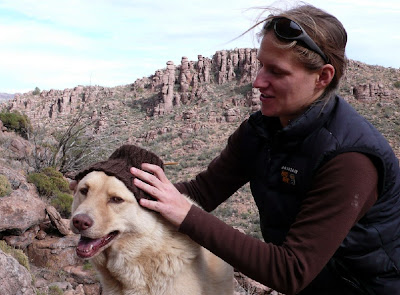 But as soon as I moved out of the frame, it was another matter. A very serious matter. 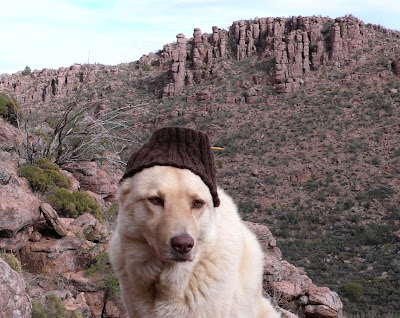 Well aside from a few sad moments of puppy dog eyes, it was a glorious day. And as we drove out of the climbing country on rough dirt roads, we were treated to a beautiful sunset. 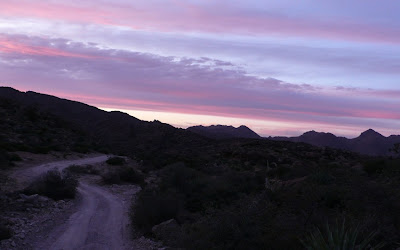 Such an amazing land this is!
3 comments:

Back in Phoenix now. Had a few days of luciously cool weather.
raindrops on the citrus trees 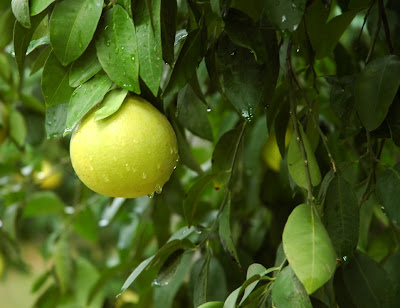 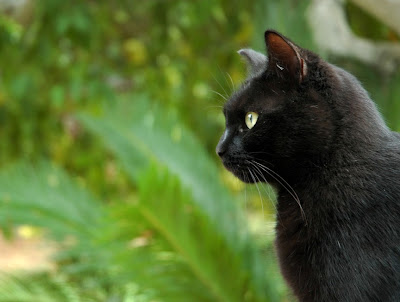 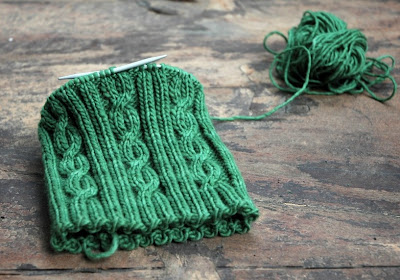 It's another Open Studio, this time in rich, green Malabrigo. It's a shorter one, a cap instead of a watchcap. I love it. And it's just screaming for a big pom-pom on top!
6 comments:

Hats. One for my friend, one for me. With cables and ribbing and a turned-up brim for a warm, winters-coming watchcap. 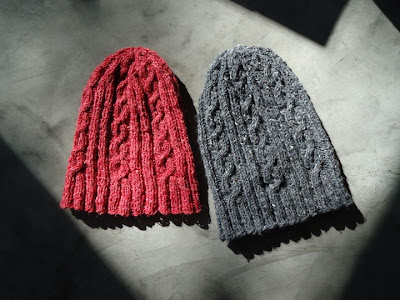 The hat was designed for my friend Andrew. Sometime last January, we spent an evening sitting at the Cambridge Brewing Company, sketching out the hat elements that he'd like. In February, we crossed the river to Windsor Button to pick out a yarn, and he (in good, manly taste) went for Donegal Aran Tweed. In early March, I showed him some swatches, picked out a cable arrangement, and knit the body of the hat. But I didn't manage to finish it for him before winter ended. 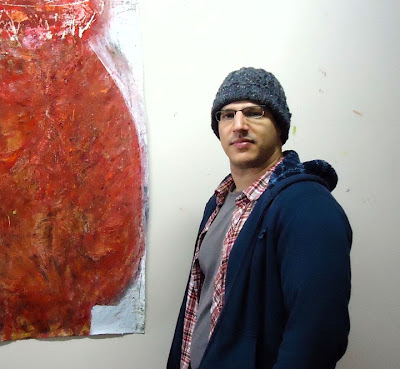 I kept re-charting and re-knitting the top of the hat, but I couldn't get the cables and ribbing to come together in a way I like. So, I put the hat away for several months. And this month -- November 2011, nearly a year since we started this process -- I picked it up again, knit myself one in red, and finally finished his! I mostly finished it at a dinner party, then got up early the next morning and sewed in the ends just in time for an outing Andrew and I had planned: Open Studio day at the Vernon Street Studios in Somerville. 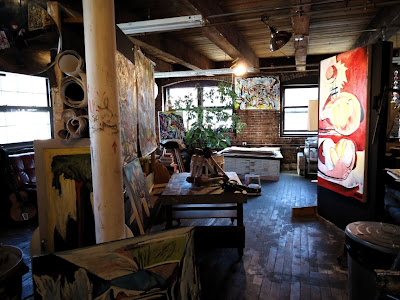 We had a marvelous time. We wore our matching hat and I smiled ridiculously the whole time. This particular studio belongs to Robert Puig Reyes, whose paintings really captured me and who graciously chatted with us and was even willing to take our picture. See: smiling! 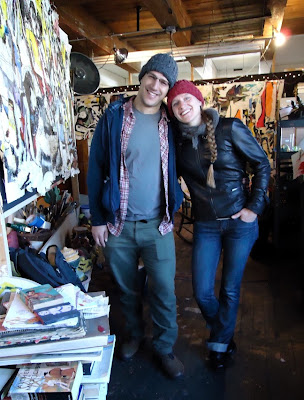 The red one, by the way, was my way of reinvigorating my energy in this design project. It's knit in a handspun wool/hemp yarn that I picked up in Nepal years ago, when Mountain Man and I went trekking there for our honeymoon. It's a thick and thin, DK-ish, sturdy, single-spun yarn. Very rustic, a good match for the Donegal tweed. 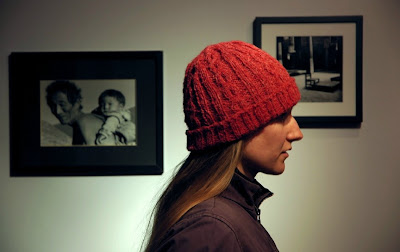 When I was thinking of what to name this hat, I thought about something that geographically linked it to the Boston-Cambridge-Somerville area, because it was infused with such a sense of place for me. But that day at the artists studios, I realized that working on this hat was like giving my friend a behind-the-scenes tour of my design studio, so to speak. So, "Open Studio" it is.

If you'd like to knit one, too, you can download the free pattern from Ravelry: http://www.ravelry.com/patterns/library/open-studio
3 comments:
Labels: Finished Objects, Patterns 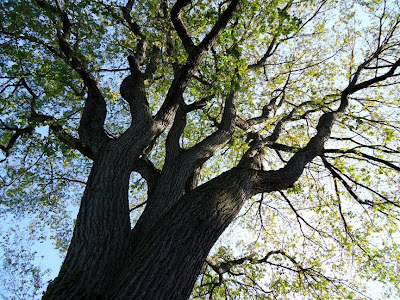 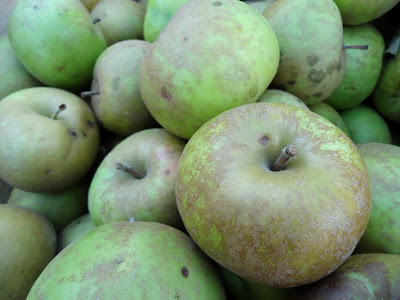 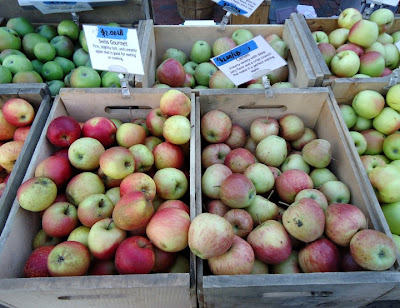 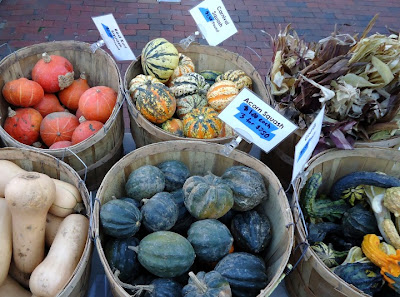 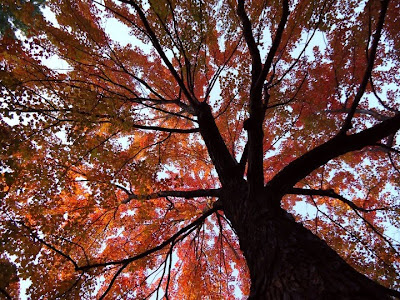 My cross-country back and forth continues. I've just been back in Boston, getting my dose of foliage and crisp autumn coolness. 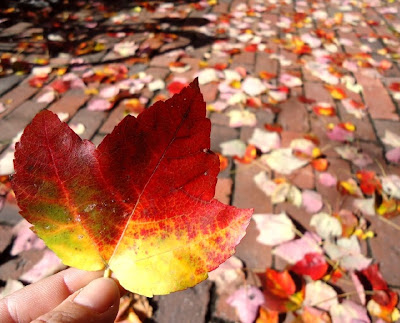 I spent much of the flight there swatching, swatching, swatching. Remember the cabled tweed hat that I started for a friend last winter? After knitting the top of it five times and still being unsatisfied with it, I needed to step away. But cold weather has come again, and I needed to figure out how to finish it. I reinvigorated my energy in the project by knitting myself one in red! 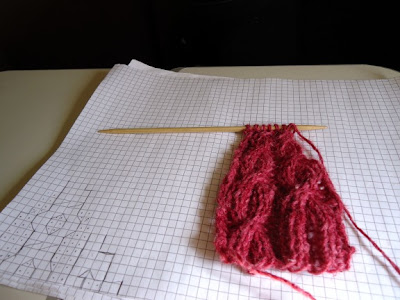 And now I was back at the drawing board with the top decreases, experimenting with different ways of working the shaping into the ribbing and cables. Bah! I like a challenge, but this was getting to be too much. 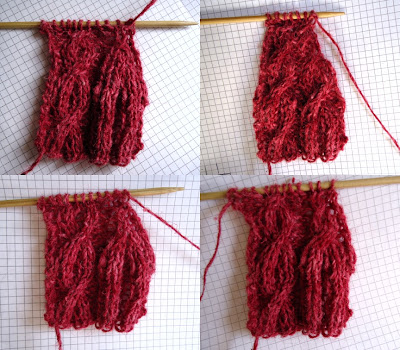 I had to put it down again for my first few days in Boston. And I threw myself into enjoying the beauty of the place and season. Sunset on the Charles River.... 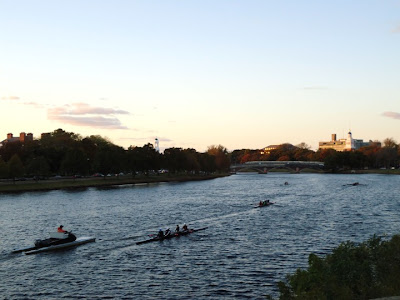 And even a snowstorm, with heavy snowflakes falling on autumn foliage ... 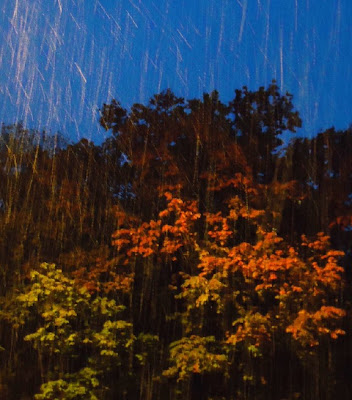