This past month was a rare gift, a time to step away from usual life, steep myself in other experiences, and reinvigorate my vital energy. Less profoundly, it made for an excellent fiber journey. One anecdote captures it well: while flying to Kathmandu, Mountain Man started pointing out the snow-capped Himalayan peaks in the distance, which I could hardly distinguish from the clouds. "My eyes are trained to see mountains," he explained. "My eyes are trained to find yarn," I replied. And so it was.

Mountain Man's cousin had the brilliant idea of a spring wedding in Tuscany, so the first week of our trip was spent in the charming hamlet of Castello di Gargonza. I was taken with the silvery greens of the landscape of budding olive trees, rosemary and lavender bushes, and grey stone villages. But it was the rich, warm tones -- ancient roof tiles, terracotta pots, red wine, sunsets -- that stuck with me. They resonated with the knitting project that I'd brought for this part of the trip, which is the Little Leaf shawl in laceweight merino (Knitpicks Shadow in 'Sunset'). 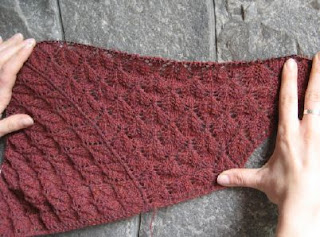 And I wanted to capture those colors in a souvenir of Italian yarn as well. At first, my dreams seemed to be out of reach (we asked the hotel proprietress about yarn stores and were met with weird looks and a 'no'). But I proved my comment about finding yarn. While strolling along the cobbled streets to the town hall, where the wedding ceremony was held, I spotted a yarn store. And I skipped out of the champagne reception early to go back to it!! I found a simple fingering-weight merino yarn in the right rusty hue. Here is one small ball, photographed the next morning next to a stone wall in the gorgeous, early-morning sun. 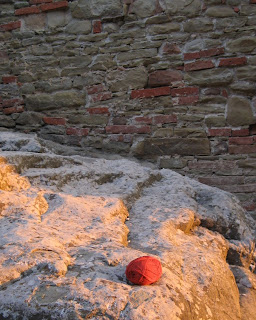 The trip wasn't always so smooth, although every problem was eventually resolved. The first hiccup came at the Florence airport, where a security officer tried to confiscate my needles. My hysterical, almost-in-tears response raised even more suspicion - "What is it about this that means so much to you?" the bewildered office asked. Oh, how does one explain to the non-knitter?!

(As an aside - I found that the major airports didn't blink at the knitting in my carry-on, while only the more rinky-dink ones made a fuss. Be warned if you're travelling abroad. Unless you want to run the risk of a ten hour flight with nothing for your hands to do, you may want to think about crochet.)

In Kathmandu, there was a hairy moment when a monkey at the Swayambunath temple grabbed the bag of yarn that I was carrying. And another hairy moment came when a rally of protestors charged into our guesthouse courtyard. My lace leaf shawl was slightly torn in our rush to get out the courtyard, but the protesters meant no harm to tourists - they were striking and trying to get the hotel employees to join them. If anything, those monkeys were more of a threat! 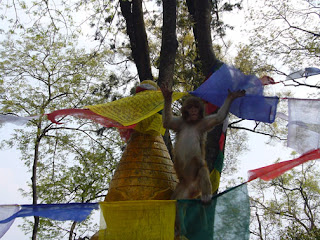 The real trouble came during our two-week trek in the Annapurna region. I had to pack light, and I only brought only one ball of lightweight alpaca yarn and stripped-down instructions for the Shetland Triangle. It was the wrong yarn to bring, since I could hardly see it by candlelight/headlamp. And it didn't look good with this pattern. I followed the lace chart scrupulously, but it looked like messy, holey black fabric rather than shapely, organic lace.

To make matters worse, since we were only passing through remote village, I didn't have access to other knitting resources but had nothing to do during the long, quiet evenings but knit. I was stuck with that one ball of yarn and no other patterns. There was a lot of drama - ripping out that shawl, trying to recreate other patterns from memory, all with my brain slightly debilitated from heat exhaustion, altitude issues, etc. Eventually I settled on a travelling eyelet pattern. And this is what I knit for the next ten days. I'm not super happy with it, but it kept me busy, and the zig zags reminds me of the mountains. Here's the scarf, protected by a bronze guard lion: 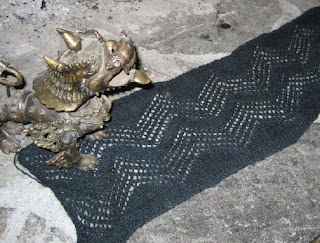 I'm slightly obsessed with yaks. The higher we got into the mountains, the more anxious I became to do two things: one, pet a yak, and two, find yak yarn. I finally got to do the petting when, after eight days of trekking, we made it to a village called Yak Kharka, meaning yak meadow. The village is four stone buildings, with herds of yak grazing on the high, steep slopes above it. Here's me, finally encountering one of these amazing animals: 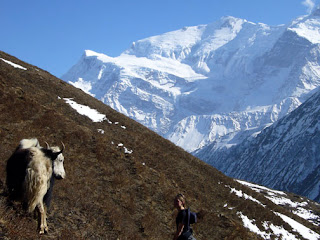 One 18,000 foot pass later, we descended to a town where I finally found yak yarn. It was such a relief, since I'd been asking during the whole trek and had not found yarn anywhere else. We still had to search for it, since it's handspun for local consumption and was not sold in any of the shops. But it was worth it. I will knit something very special with this yarn and remember the rugged landscape, the strange beasts, and the wonderful, wizened women that created this yarn. 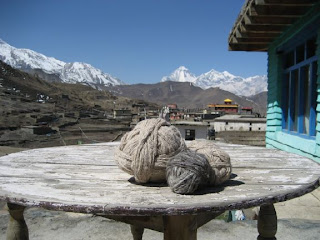 By the end of our month, I'd accumulated quite a cache of new yarn. In addition to the small amount of terracotta wool from Tuscany and the yak yarn from the Annapurna region, I'd found excellent yarns in Nepal's cities. In Kathmandu, I dragged Mountain Man halfway across the city to this yarn store for wool yarn (that's what the monkeys were after) and colorful silk yarn. The yarn was all sold by the kilogram. 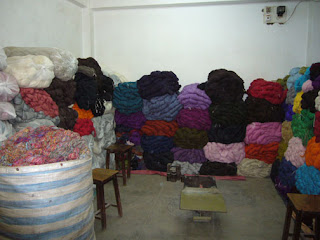 I also found some scratchy but interesting nettle yarn, which I'll probably use to knit a mesh shopping bag. Then in Pokhara, I picked up a gorgeous red hemp-silk blend. Here's the hemp-silk, the silk, and the wool, overlooking the garden of the Kathmandu Guest House on our last day. 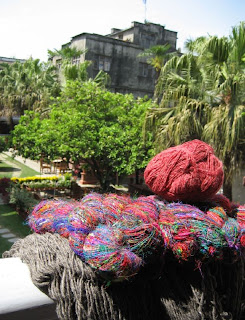 Truly amazing, I'm rather speechless. The monkey story is by far my favorite, but the Itlian castle looks quite marvelous as well. I can't wait to see more photos! And Yak yarn, how incredible! You'll have to let us know what it is like.

What an amazing journey. "my eyes are trained to find yarn." We all have our talents! I can't get over that sassy monkey stealing your yarn.

I went to Kathmandu and Langtang last year and I think I stayed in the same guest house! was it very beautiful and wooden? with an incredibly lush breakfast terrace?

I miss nepal so much. It was so nice to read about your trip. You can see my old travel journal here: http://kizzyvittles.typepad.com/six_weeks/ We spent about 3 weeks in Nepal and a month and a half in Thailand and Cambodia.

Just found your blog through Magknits (lovely hat) and I'm SO jealous you got to go to Nepal! That's my dream trip...