I fell asleep last night to the sound of softly falling rain. It was a peaceful end to a glorious Christmas day. We celebrated in Washington, D.C., which was still blanketed in snow from last week's blizzard. It made for a beautiful walk .... 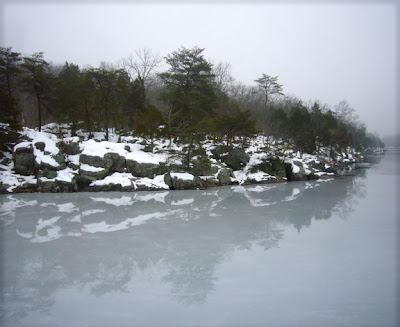 And everyone was decked out in hand-knits! For my mother, I'd knitted a Shetland Triangle in the indigo-dyed silk/wool yarn that I bought in Taos this summer 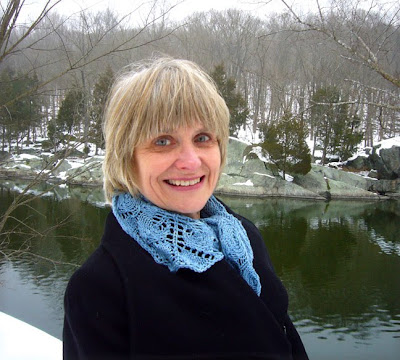 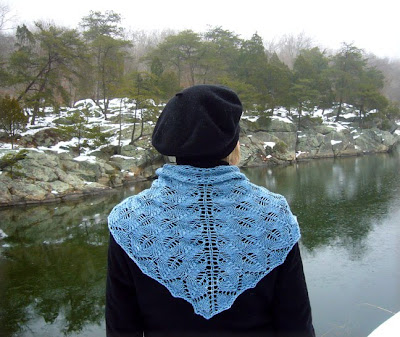 For my father, I'd knitted a Cambridge Watchcap in a salt-and-pepper alpaca/.wool yarn. He also happened to be wearing the cabled tweed scarf that I knit for him a few years ago. 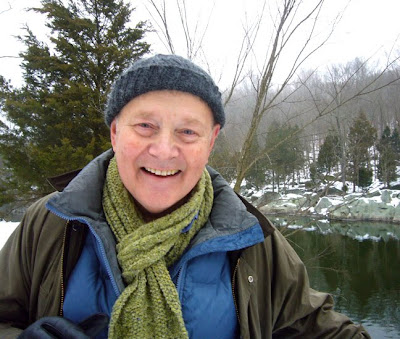 For my brother in law, I'd knitted a simple cap (based on the Turn a Square hat) in a soft wool/silk yarn. When I asked him what color he wanted, he'd told me that I could knit any color between dark gray and black, so I picked a matte black with charcoal flecks. 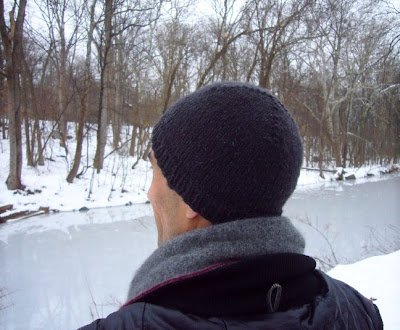 For my sister, I'd fashioned a dramatic flower pin: dyed with Kool-Aid, wet-felted, and beaded in the center. It was a little too wild, it turned out, so I was happy to be the one to wear it on the walk, along with my dependable Cambridge Watchcap and Storm Cloud Shawlette. 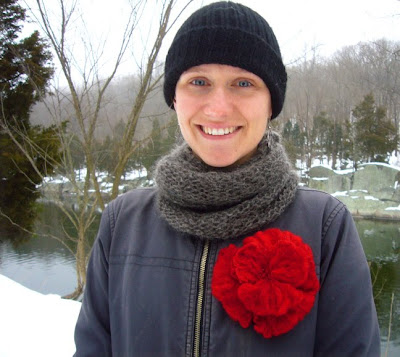 Mountain Man and my sister were along the walk, too, but since they were wearing hats that had been previously pictured on my blog, they were only too happy to escape the photoshoot. :)
6 comments:
Labels: Finished Objects

This cardigan is not yet finished. I brought it to the canyon this weekend and furiously worked on the embroidery in between climbs. But when the day wrapped up, and the sun was about to dip behind the horizon, it was time to take pictures, dammit, finished or not. It's close enough that I call victory. 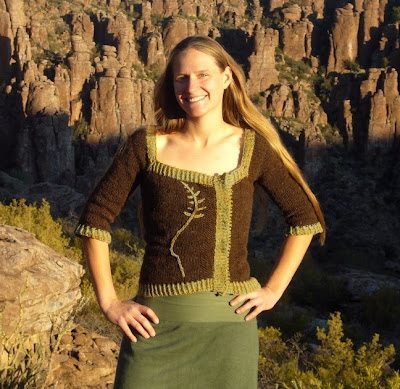 The story behind this sweater stretches back to two summers ago, when I visited Nan Kennedy at her glorious Maine farm. I bought two skeins of beautiful, pumpernickel-brown wool and one skein of gray/green/ochre dyed wool, intending to make small accessories.

But this is special yarn. Raised on Maine pastures. Solar-dyed with seawater and earthy pigments. Infused with the energy of an amazing woman. And so I decided I wanted to turn it into a garment that was just as substantial and artisanal. 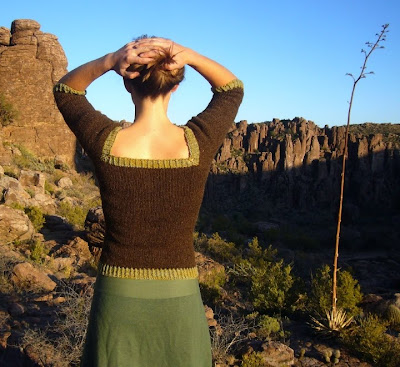 Figuring out just what that would be, however, was a very winding, very non-linear process.

The reality of my yardage constraints led to certain design choices: the precise tailoring, deep square neck, and stockinette fabric were meant to economize on yarn, while the top-down construction meant that I could literally knit until the yarn ran out, and even decide mid-project whether it would turn into a vest or a cardigan.

The wilder design elements -- the asymmetry, the hidden hook-and-eye closures, the short-row sleeve caps, the embroidered fern -- emerged more organically, sometimes even unexpectedly. For example, I initially swatched a leaf pattern to run down the front. The asymmetry came in as a way to showcase that colorwork, but I liked it so much that I kept the asymmetry even after dropping the leaf colorwork section. 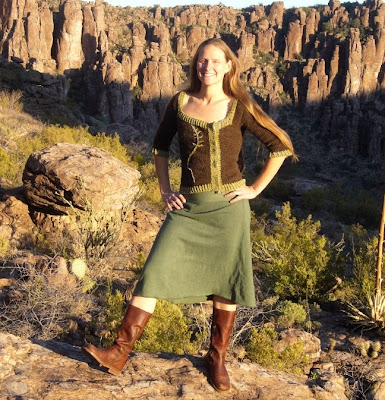 This kind of "emergent design" made space for beautiful serendipity. But it also had its troubles, most notoriously during my fitful attempts to figure out the shoulder (basically, the yoke didn't produce enough fabric to fully cover the shoulders, so I experimented until I was ready to scream with short rows, increases/decreases, needle size changes, etc to get that shoulder shaped in the right way).

I still have to finish the embroidery ... and I suspect I'm going to rip it all out and start it fresh, with a straighter fern ... but that may be left to another day.

P.S. The dress, if you're curious, is an organic cotton and hemp tube dress from gaiaconceptions. Eco chic for the urban nomad.
11 comments:
Labels: Finished Objects

We've had a cold snap in Phoenix, bringing the first nighttime frost. I picked all the persimmons off the tree; there were only five of them, but it was the first year that the tree bore fruit, and I didn't want to lose a single one. 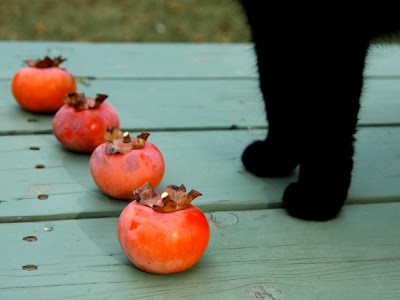 Persimmons with curious cat paws
As for me, it's time to hibernate and get to work, so that I can bear some fruit as well!

It's true in my "real" life as it is in my knitting life. The implication for the knitting is that I need to push through the wall with my Seacolors cardigan. Since I hit a point of frustration with the sleeves in late October, I've put it aside and knit two hats, a baby set, a scarf, and half a Christmas stocking. But it's time to resolve the big things. I picked up the cardigan again last night, and I think I finally figured things out. Hopefully will have a finished sweater by the weekend ....
3 comments:

a bright leaf in a dark puddle

A single bright leaf can be amazingly powerful in the midst of early winter grayness. 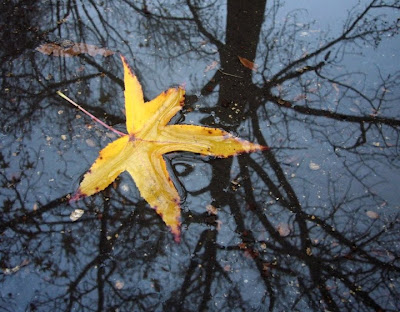 Most of the time I feel like I'm part of the puddle, but every once in a while I get to be that punch of color. 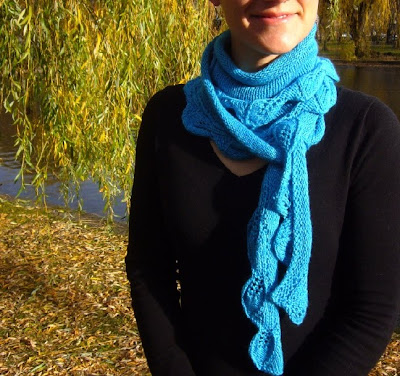 This is a brilliant little pattern. You cast on lengthwise, create a curved scarf using simple short rows, and then finish it off with a border of knitted-on leaves. I went down a needle size to get gauge, but it blocked out quite a bit longer and narrower than the original one. I love it, though. It feels lush and lively. It lets me be that bit of color moving through the world. 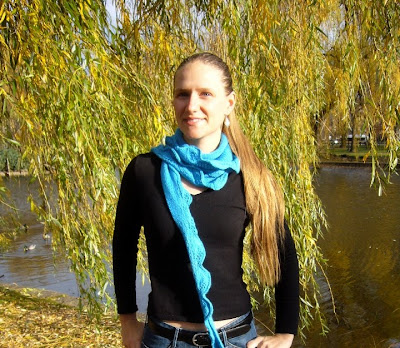