Once upon a time, I had a favorite white sweater. It was a roll-neck pullover from J.Crew in soft cotton and cashmere. 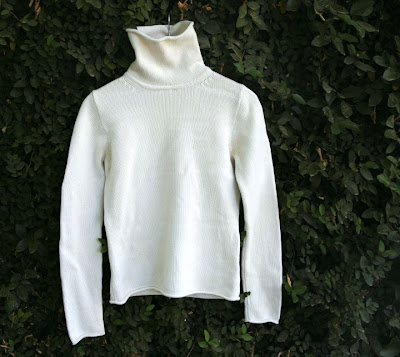 I used my tidiest skills to make physical repairs, but the faint yellow under the arms and a stubborn dot of a coffee stain on the chest meant that the white sweater never came out of the drawer for the past two years. It made me sad everytime I spied it, because I knew it had a lot of life left in it. 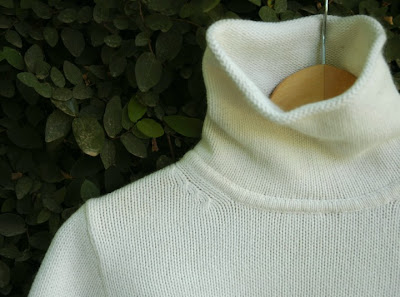 What's a girl to do? Well, an idea came to me recently when we had to prune a branch off of our pecan tree. I plucked all the unripe pecans off of it and put them in one of my dyeing buckets. After snapping this photo, I bashed and bruised them with a wooden post (very cathartic, must say) and covered them with water to soak for a week. 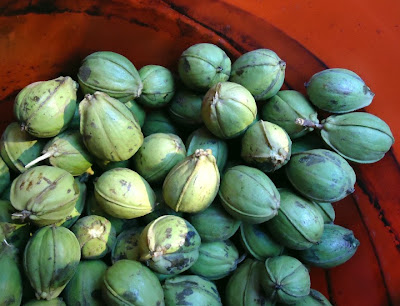 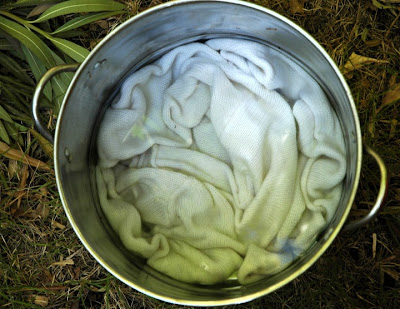 Meanwhile, this is what had become of the soaking pecan hulls. The water had become a thickened, slightly frothy yellow-brown. Slow, fermenting soaks like this can have an "ick" factor. But I find them very earthy and satisfying, and so much easier than hot dyeing, when I have to haul heavy pots around on the stove. This just happens in buckets in a corner of my backyard. 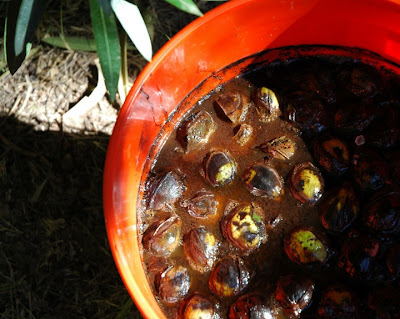 For cold dyeing, especially with plant fibers, you typically need a long soak. The wet sweater went into the strained dye liquor and stayed in for almost two days, with repeated airings (which I'll explain below). During the daytime, I'd move it around every few hours to try to make the dyeing more even. During the nighttime, though, it would stay in one spot for 10-12 hours, so that some spots ended up darker than others. If I'd really wanted it to be even, I would've removed it at night. But, well, I relish the wabi-sabi quality of the uneven dyeing (and in real life, the variation does seem a bit softer). 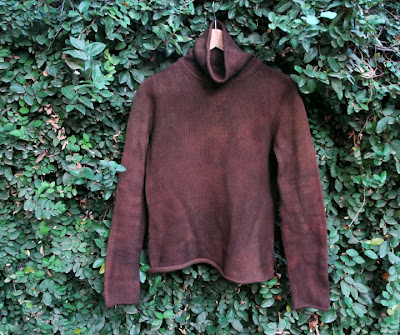 The one thing I wish is that I had taken process photos of the dyeing. There is definitely something curious going on with the oxidation and pecan hull dye. Since I haven't seen anyone else write about it, you'll get my full description. 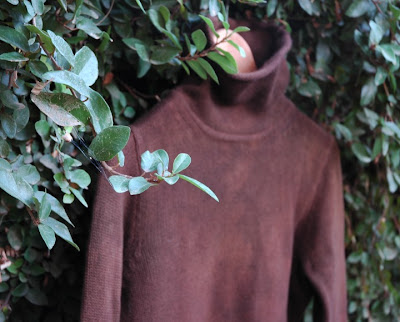 The dye liquor was yellowish to start, and in the first couple of hours of dyeing, the sweater was taking on a light yellow-brown hue, except for the underarms, which were turning orangeish (probably due to the aluminum salts in deodorant, which were basically an inadvertent mordant!). It was hideous.

I pulled the sweater out of the dyebath to reconsider, and while it was in the air, over the course of maybe an hour or so, the color of the sweater was transformed. It darkened, deepened, and became more reddish rather than yellowish. This was really a shock.

I've dyed with dozens of natural dyes -- leaves, flowers, barks, and bugs -- and the only other one that you see this kind of real-time, color-changing oxidation process with is indigo, which is in its own category of natural dye because the chemistry is so different (basically, the pigment needs to be in a reduced and alkaline solution in order to be in a dissolved form that can adhere to the fiber. You carefully lower the fiber into the bath so that you don't introduce air, and then when you remove it, and the pigment hits the air and oxidizes, the fiber turns from greenish-yellow to blue).

The process of repeated airings not only changed the color of the sweater, but over time it introduced a lot of air into the dyebath itself, and that became a darker reddish brown as well. It was fascinating. Wild and crazy times with natural dyeing!
9 comments:
Labels: natural dyeing

Over the last few days, I did all the tedious finishing details on Mountain Man's situpon.

I decided I didn't like the original cast-on edge ... 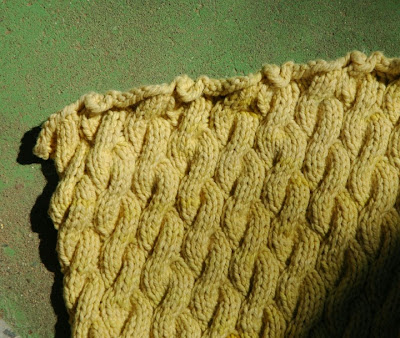 So I carefully unpicked the long-tail cast-on, picked up the live stitches, and bound off again, with some k2togs along the way to tighten up the edge. Much cleaner and tidier. 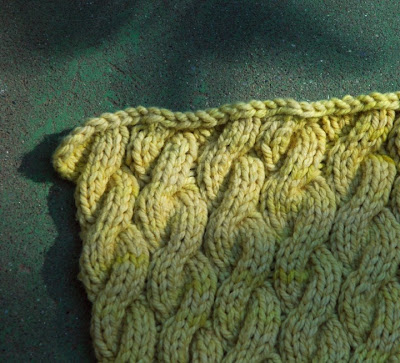 Next, I cut a square of wood grain oilcloth and went around the edges with my small hole-punch. You can sew right through oilcloth with a sharp needle, but holes are necessary for either blanket-stitching with a tapestry needle or crocheting. 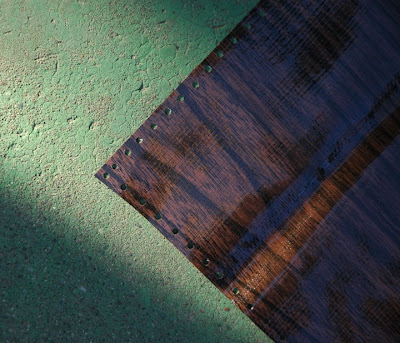 Finally, I crocheted the backing to the situpon using contrasting dark brown yarn (actually, the same yarn for Mountain Man's sweater). I did it in a way that looks just like blanket stitch but was much easier (since with regular sewing, I would have needed to be drawing a long length of yarn through each hole, and with crocheting it's just a tiny loop to pull through). 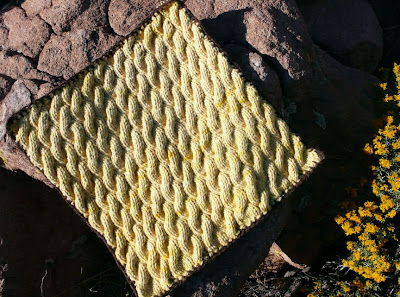 And now it's a sat-upon! We took both sit-upons out climbing yesterday and were very happy indeed on the rough rocks. 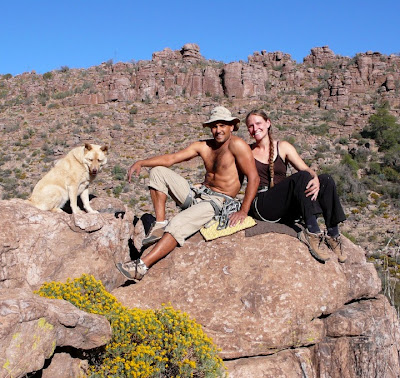 We were down in Cochise Stronghold, camping and climbing for the weekend, when I finished the knitting for Mountain Man's situpon. I stuck it on a barbed wire fence. It was magnificent in the morning sun, with the golden-green grass lighting up behind it! 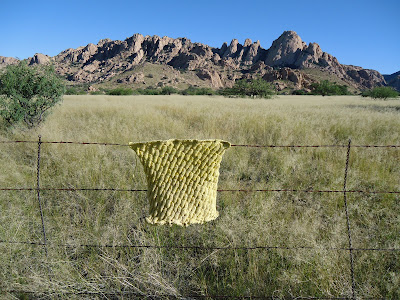 The original situpon had an 8-stitch ribbed cable, which makes for a great fabric but is interminably slow and boring! For this one I did cables that were 6-stitches wide but twisted only every 8 rows. Still boring, but marginally faster without the ribbing. And I like the big, lush cables that result. 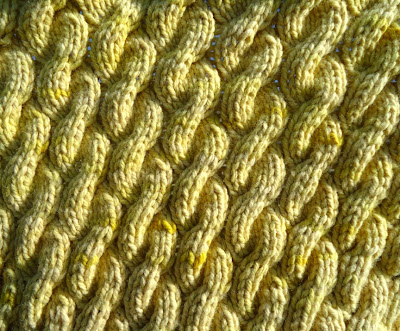 Here's what the camping scene looks like, by the way. This was just as I was finishing .... knitting by the morning campfire ... drinking coffee and keeping the strong, slanting morning sun out of my eyes. 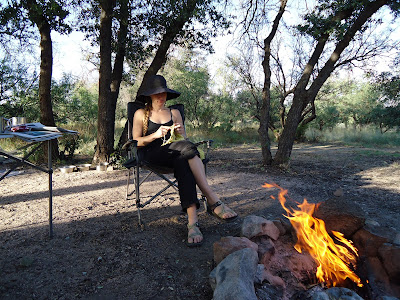 And a few snapshots from the rest of the weekend: climbing up "Ewephoria" .... 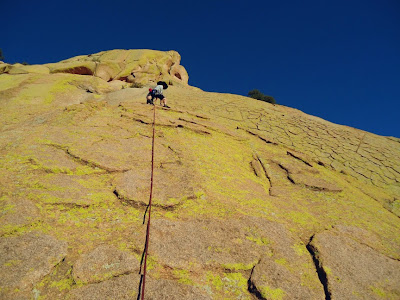 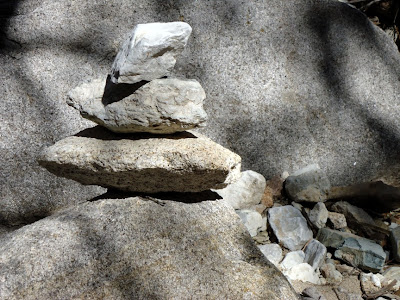 And a refreshing dip in a shady rock pool for Isis .... 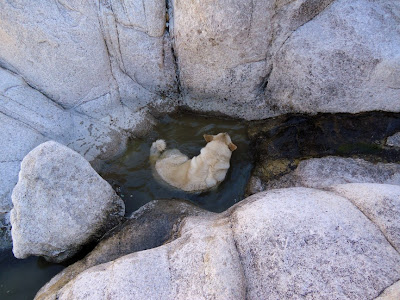 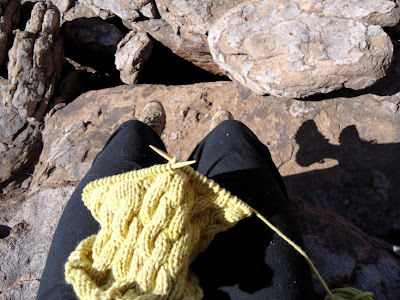 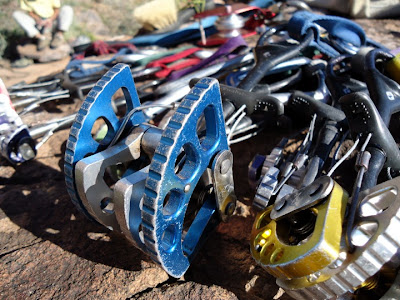 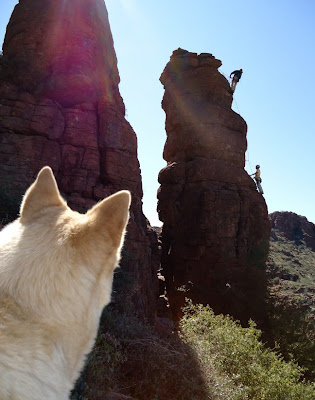 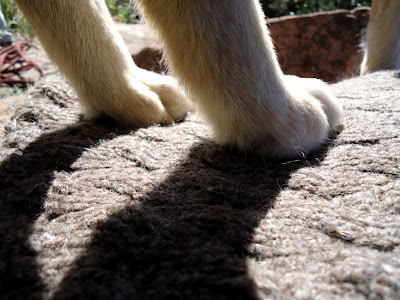 Isis knows what I'm knitting .... she keeps trying to steal mine!
3 comments:

Quick jaunt back to Cambridge for a few days. Brought along a skein of aran weight wool, naturally dyed with African Sumac leaves from my backyard to a sunny, canary yellow. As is my customary manner, I pulled it out whenever possible.

On the plane, casting on in the intense morning light 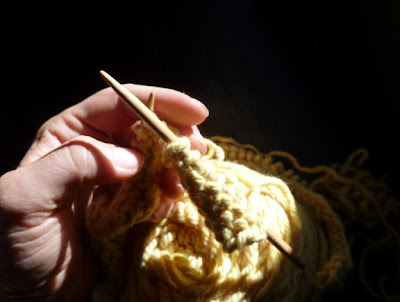 On the T, near midnight 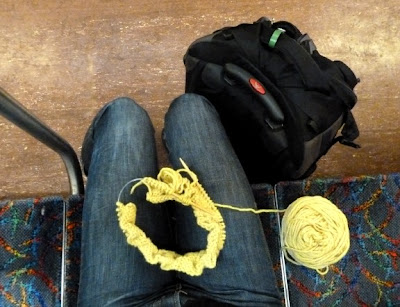 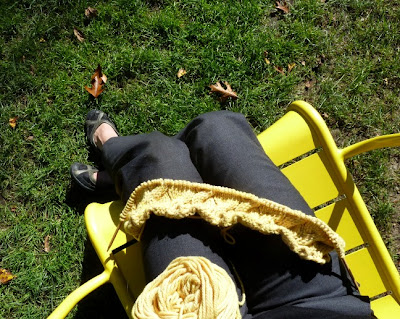 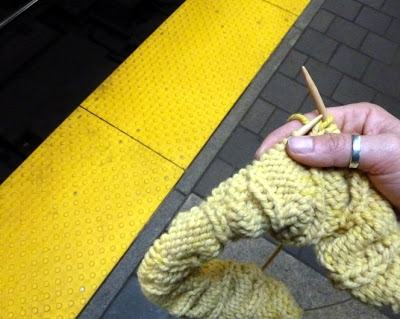 Can you guess what it is? I'll give you a hint: it's a densely cabled square ...

Another weekend of climbing .... 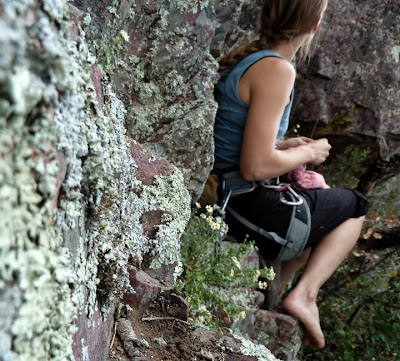 Means more progress yet on the baby blanket .... 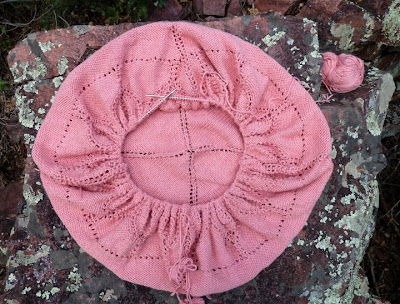 It's so big now that I broke the 16" circular needle that it was all scrunched up on before! Now on a 24", to give you a sense of scale.

It's getting too big to travel with, too cumbersome to haul around. So, it's being put away for a few days while I'm on the road again now, but when I get back there will just be a few rows to finish up! And then the big reveal :)
2 comments:
Newer Posts Older Posts Home
Subscribe to: Posts (Atom)