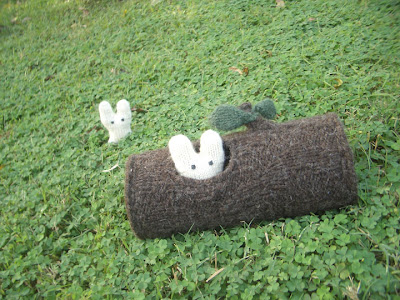 When I first saw the Woodins pattern on Knitty, I knew I had to knit it (I find little wood spirits totally captivating). But naturally, I improvised with the pattern and ended up with something slightly different.

I followed the pattern for the woodins themselves pretty closely, just changing yarns (Lamb's Pride Worsted) and needle size (3's - accidentally) and omitting the leaf tail. It was with the log that I went in a different direction. 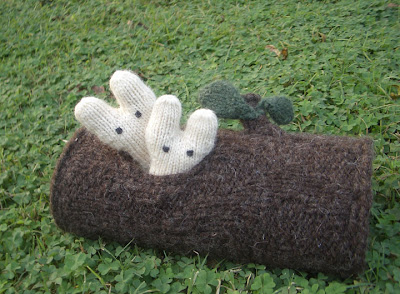 The pattern calls for you to knit a long cylinder which you felt, fold in half, and stuff. I didn't have enough bark-like wool for the double layers, and anyways, I thought I could simplify by knitting just one stiff layer of thick, scratchy wool (Bartlett's, I think). I knit a shorter cylinder, improvising for the bark pattern, hole, and twig. The log that resulted was aesthetically pleasing but functionally a failure: it wasn't stiff enough to maintain the cylindrical shape. Ah-ha, that's why she has you knit two layers and put stuffing between them!

Amey recommended that I line it with plastic canvas to give it shape, and this is how I ended up salvaging the log. I cut a piece of plastic canvas to fit, covered it with brown fabric, and stitched it in. It took me f-o-r-e-v-e-r because my sewing skills are so rudimentary (so much for saving myself time by only knitting one layer). But I think it came out well in the end. 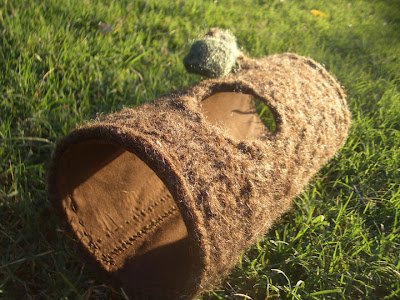 I'm sending it to a Finnish friend who was my roommate at my Welsh boarding school. We've only been in sporadic touch over the last ten years. But she just had a baby, and I wanted to make something special for her. The woodins pattern seemed like an appropriate gift to celebrate our two years in what was truly a magical, ancient-feeling, wooded place.
Labels: Finished Objects

Oh so adorable. And I love your photos.

this is so crazy cute i can't even explain it.

Those are just so cute they make me ache. I love the log too.

Those woodins are just about the cutest things ever. Your friend is going to love them! Great work...Sorry to hear about the log troubles, though. Looks amazing in the end! :)

oh my gosh that came out SO cute! and kudos to you for all your work on the log, wow. it looks great, and what a unique gift for your friends' baby, awesome!!