My mind has been very distractable of late, flitting from task to task when I need it to be productive and focused. I have no fewer than ten projects in my rotation, which means that none of them actually see progress (which is also why they don't show up on the blog). Then for days at a time, I'll go off on an obsession with my natural dyeing, covering the counters with mason jars of marigolds, sweet fern, black-eyed susans. I just barely held off a recent urge to order a drop-spindle. And let's not even get into the rest of my life! 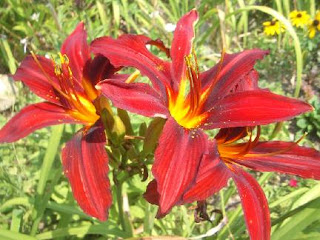 (pause and look at some daylilies)

In the past week, I tried to exert some control over this maddening non-linearity. All my knitterly attentions were devoted to one project and one project only: my hemp tank top. With each mistake or challenge - and there have been many, since this is unforgiving yarn and I'm making up the pattern as I go - I just frogged and re-knit rather than abandoning the project for a spell. 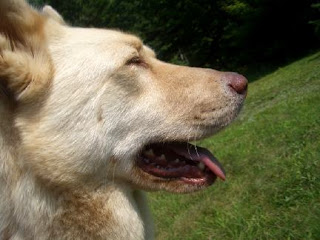 (how about a doggie in the mid-morning sun?)

You might expect that this resulted in tremendous advances on the project. That's only partly true (I'm satisfied with my progress, although all the adjustments and re-knitting of offending portions mean that it's not finished yet). But that's okay, since clamping down on my distractibility was only partly about productivity. The other thing it's about is mental quiet. And I did find that by focusing on one project, rather than wildly rotating through a dozen of them, knitting became a calming presence instead of another source of frenetic energy. 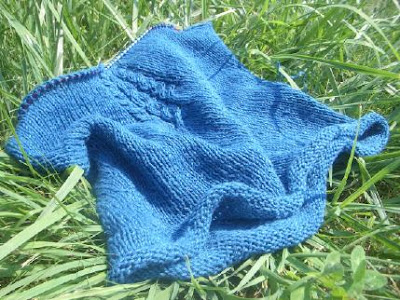 I've never been a one-project gal before, and I hardly expect this one week to thoroughly tame my ways. But it was a good reminder of the beauty of focusing, and my brain feels nicely calmed down.