My hemp tank top got its high profile premier during blueberry picking this weekend... 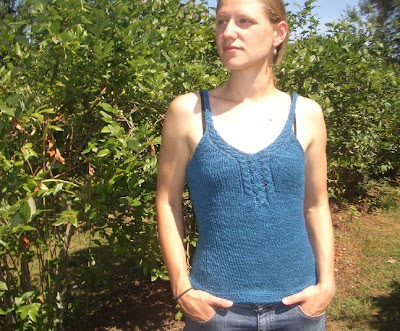 Yarn: Lana Hemp, allhemp 6, "deep river" 2.5 hanks
Needles: #6 24" circular from Knitpicks
Pattern: I winged this one. I started with some sketches and vague ideas -- waist shaping, cables at the sternum, separating out to straps -- but nearly everything was knit several times until I got it right.

Despite copious swatching, I had to cast on and knit a few inches no fewer than three times -- first 148 stitches, then 132, then 124. My waist shaping was a bit off. I kept changing my mind and re-knit the center cable at least 4 times. It took me 5 tries to get the proportions right for the bust decreases. And the obscene amount of curling at the bottom (I swear, my swatch didn't show this!) meant that I had to add 5 rounds of crochet to make it lay flat. But, but! I persevered and am very pleased with the results. 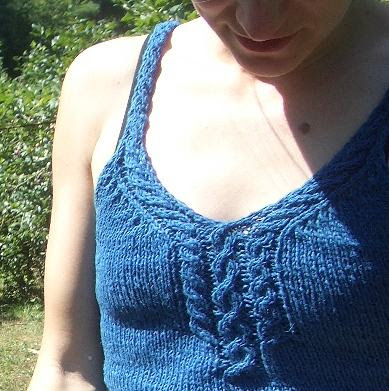 The back is very simple -- I did a few inches of knitting with twisted stitches to reducing the width, stretch and roll of the fabric. The cabled straps are knit from the front and will be simply grafted to the back (they're merely pinned for now so that I can give them a final fit after they stretch). I meant to add a few rows of crochet to the back as well as to the bottom, but my crochet hook was lost between some floorboards. 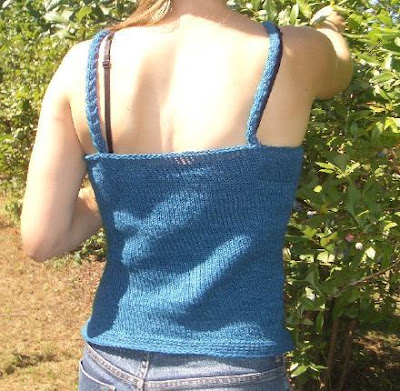 Anyways, since I didn't carefully record what I did, I'm afraid I don't have many useful pattern notes to share with you. But I can make a few comments on the yarn, which truly put me on an emotional roller coaster:
First impression, in hank: I'm in love! gorgeous color and much softer than expected
During initial swatching, on bamboo needles: good lord, this stuff is a b*tch to knit with
After switching to metal and a larger gauge: hmm ... maybe it's not so bad after all
As I did the third take of the cast on: actually i'm going to scream. this yarn has a cursed drape and a weird bias.
Once I figured things out well enough: hemp happiness!
Labels: Finished Objects

That's lovely! Nice job making up the pattern - I love how the cables at the neckline extend up into the straps.

I haven't worked with hemp yet; it sounds...challenging.