Of all the natural dyes in the world, madder may be my favorite. I love its deep red-orange hues, its earthy aroma while simmering on the stove, even its finicky nature in the dye-pot.  It was natural that it would be one of the first plants I wanted to grow in my dye garden. 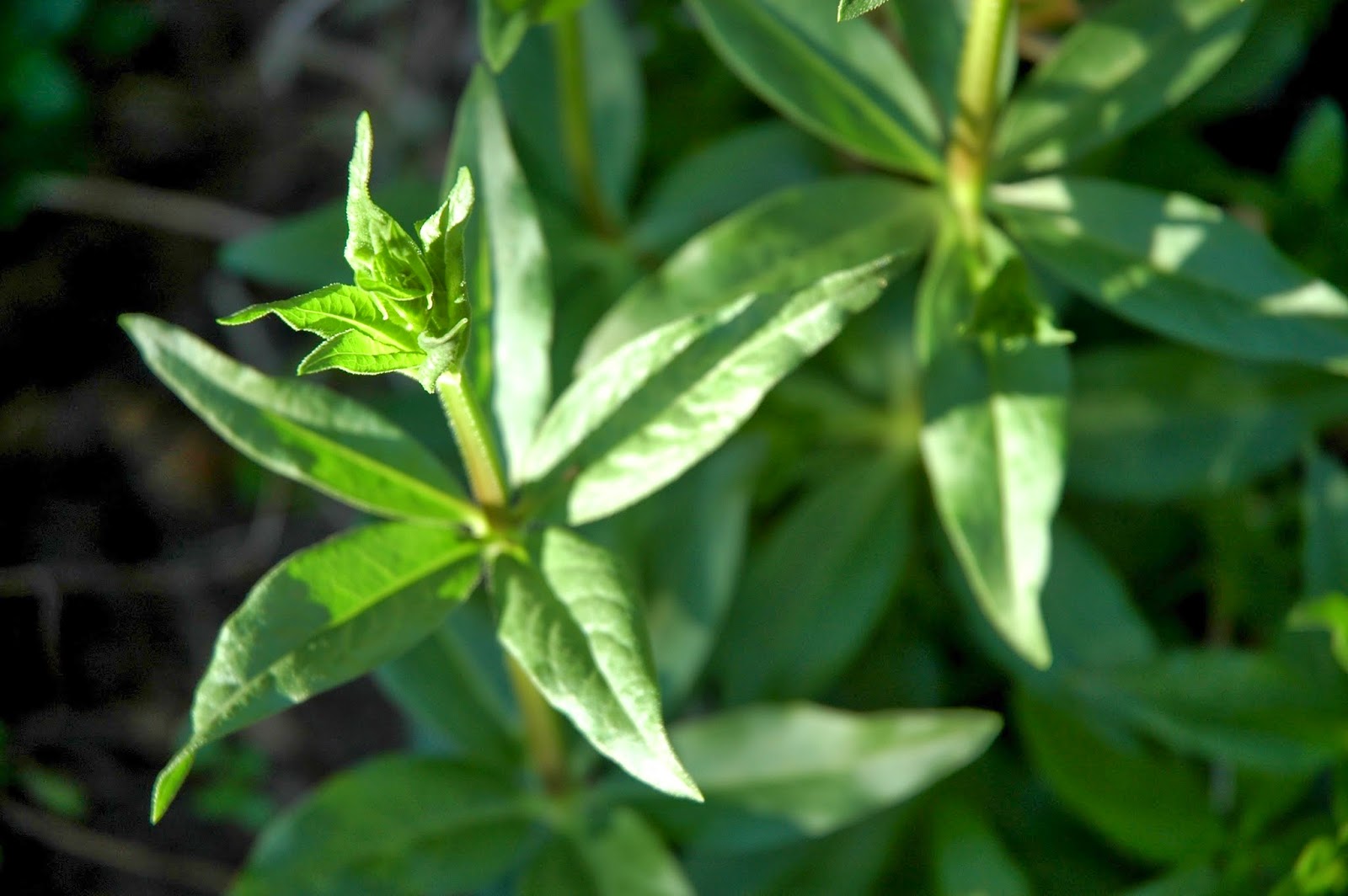 I planted the seeds in the spring of 2009.  Only one of the seeds germinated, but it turns out that's all it took.  In no time at all, it expanded to fill the whiskey barrel and then some! Every winter, I'd cut it down to the ground (if it hadn't already been killed down by a hard frost). In early spring, it would put out tons of fresh, green growth. 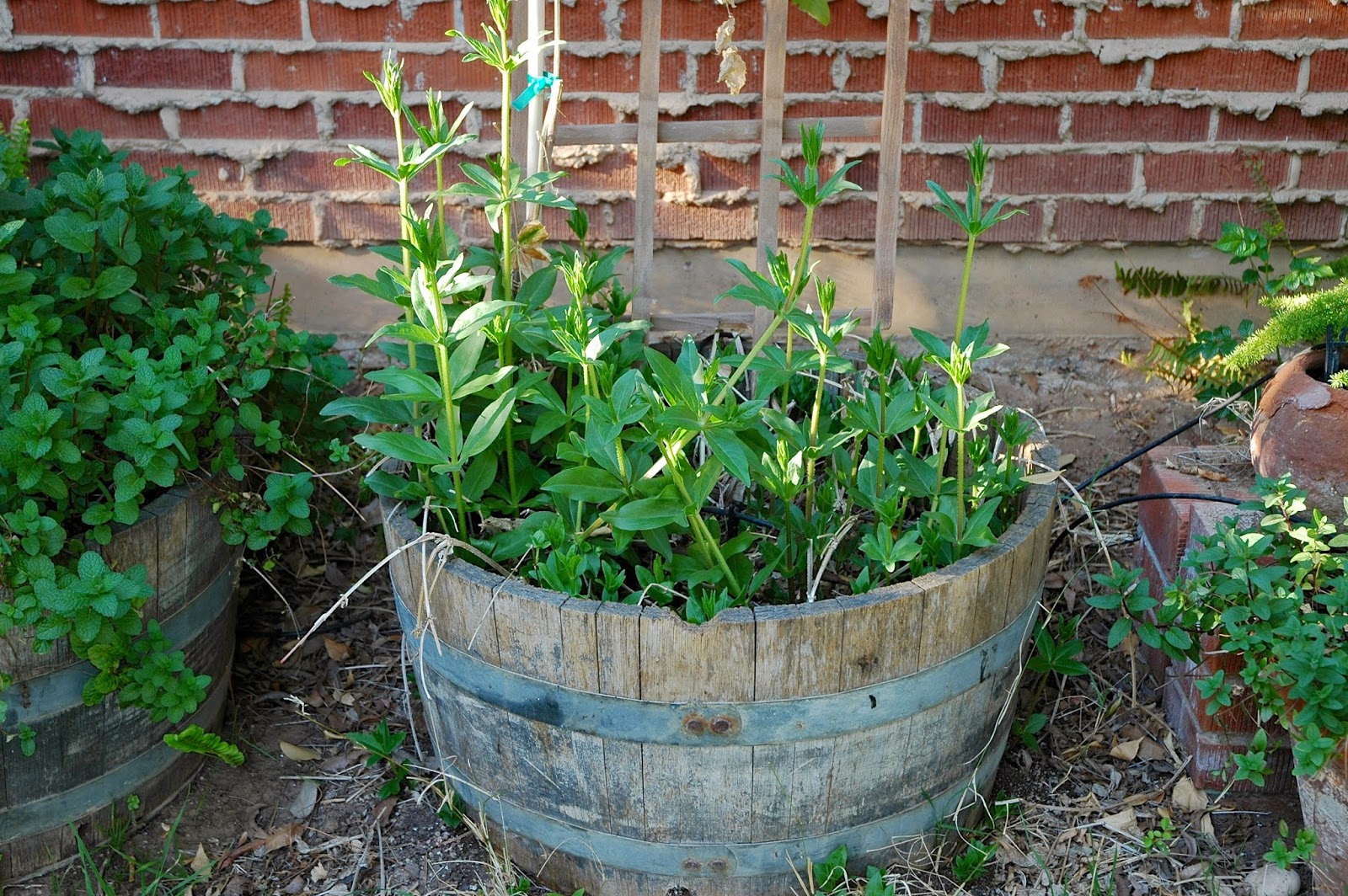 And by summer, it'd take over the rest of that corner of the garden with wild, scraggly, horridly scratchy stems several feet in length.  It was so aggressive, it overtook the barrel of mint next to it!  To be honest, it's always been a dreadful plant, but I kept it around because I was so darn excited about dyeing with the roots someday.

Well, dear readers, that someday has arrived!  I started out by burrowing my way down through this year's tangle of growth to peer into the roots ... 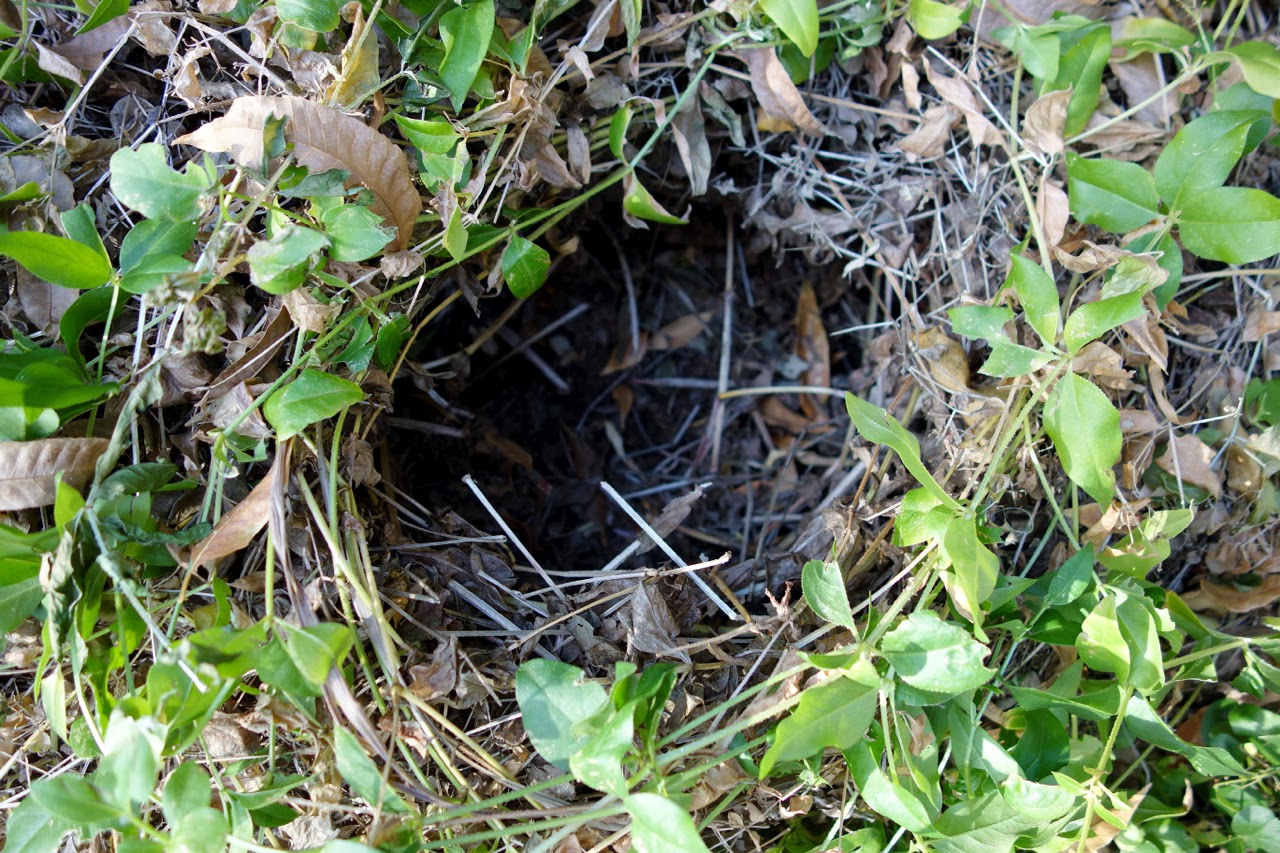 There they are. Not really so enticing when first encountered.  The vivid orange flesh of the roots isn't always visible from the outside. They just look like plain old roots until you scratch the surface a bit. 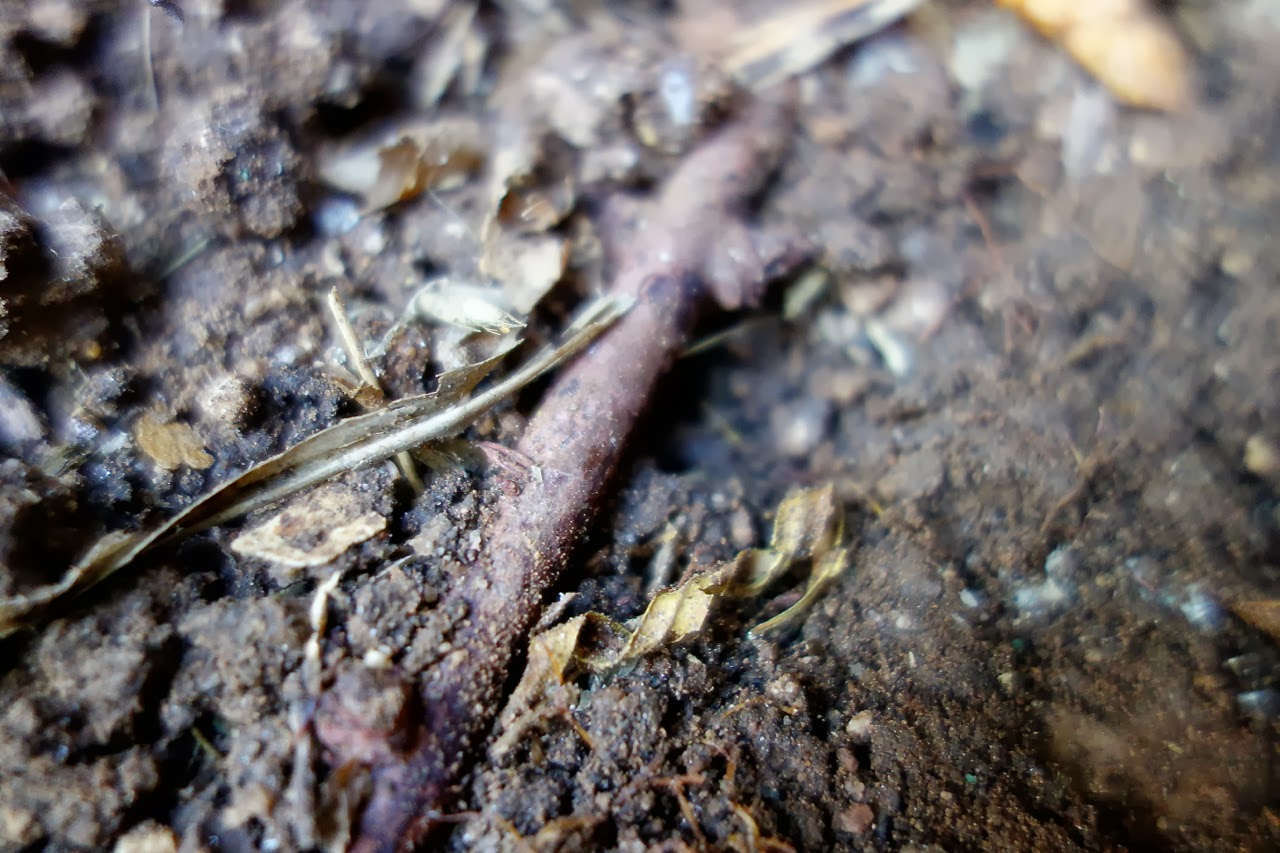 And digging them up turned out to be a delicate job. It turns out that the roots are quite brittle, quite brittle indeed.  Tugging on a root would cause it to break off an inch or two below, which meant that the rest of the root could get lost into the soil. So I ended up doing quite a lot of careful excavation, brushing away the soil with my hands and tracing out as much of the roots as possible before trying to lift them out of the barrel. 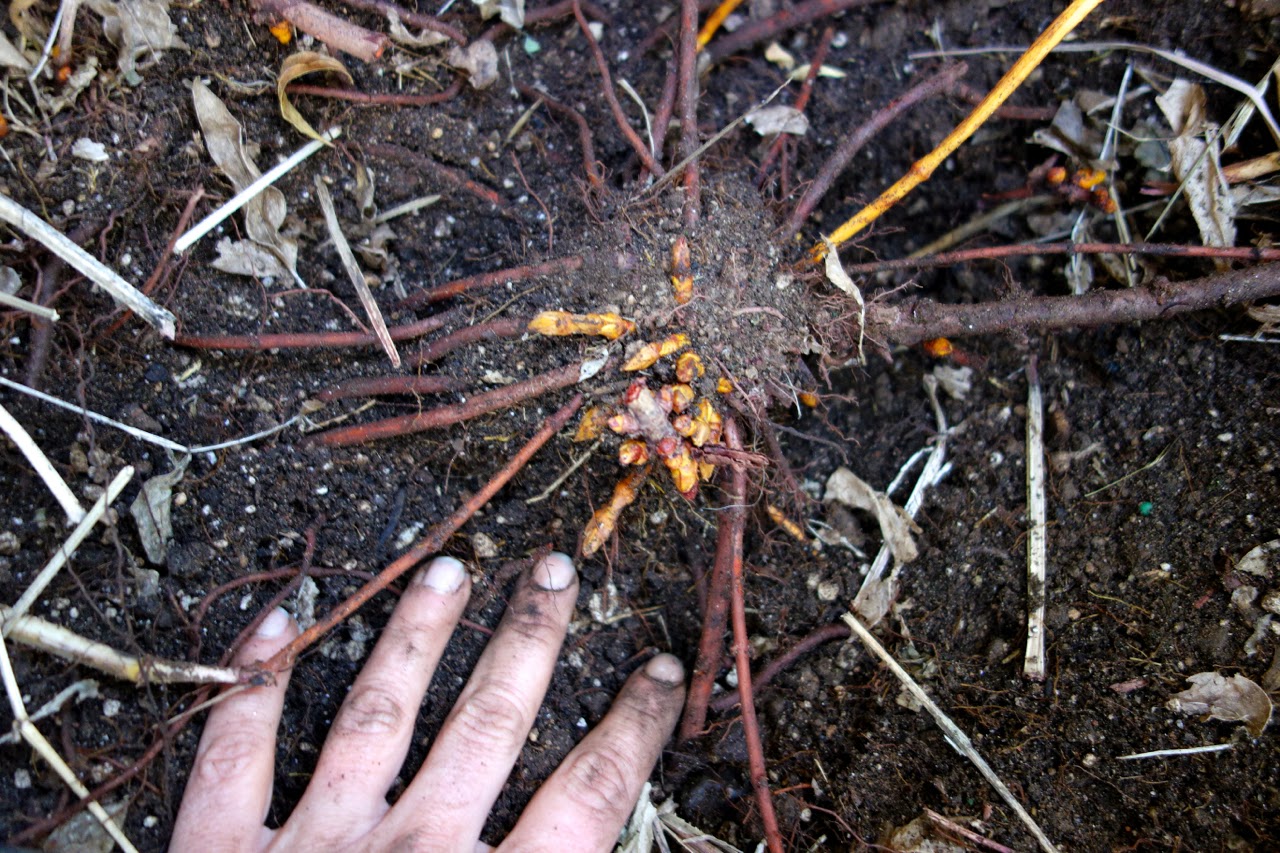 Here's that same root system after I dug it out. This one is the oldest plant in the barrel -- planted in May 2009, dug up in January 2014 -- and the center root was as thick as my thumb.  It snapped off from the rest of the root ball when I was digging it up, so I'm holding it here separately in my left hand (right side of the photo). 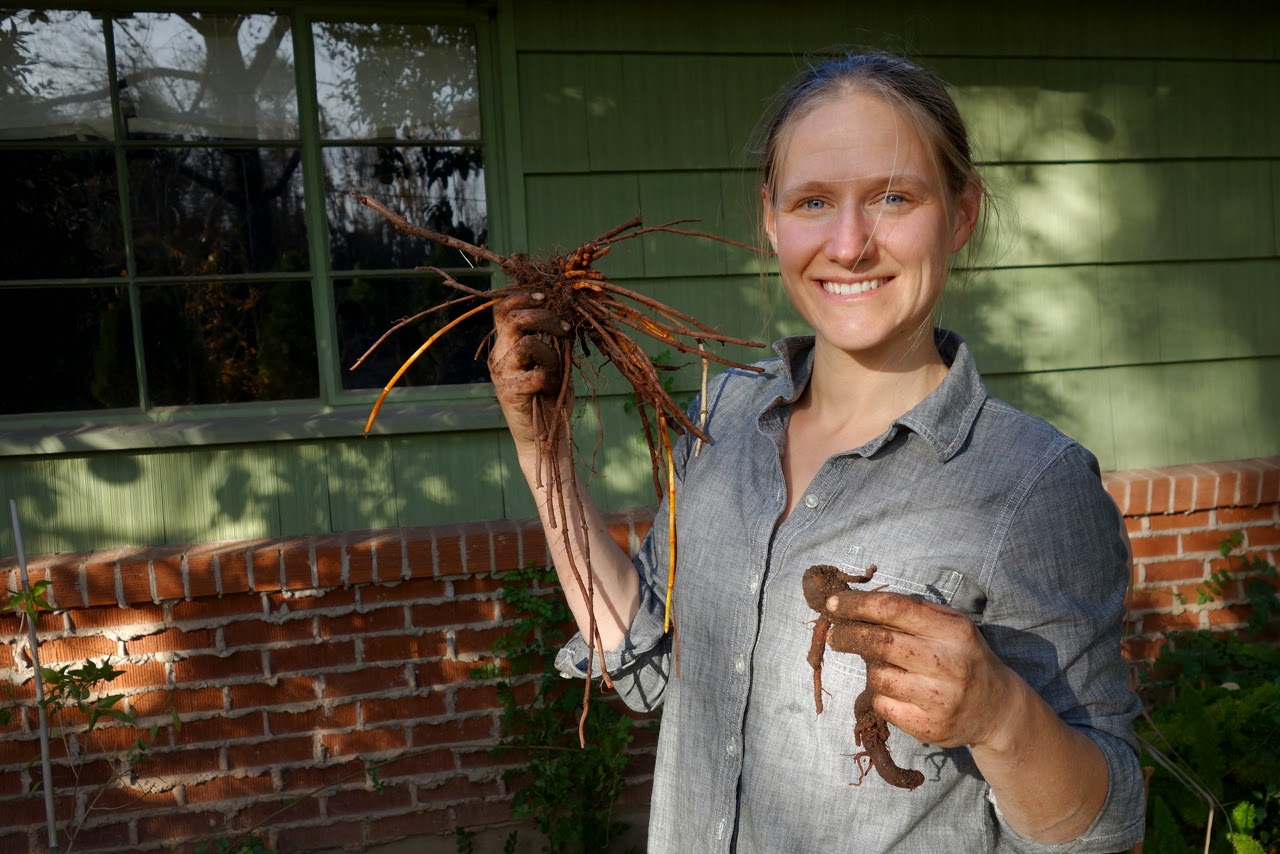 After digging up the roots, it was time to give them a good scrub. Before their bath they were dirty and kind of dingy-looking .... 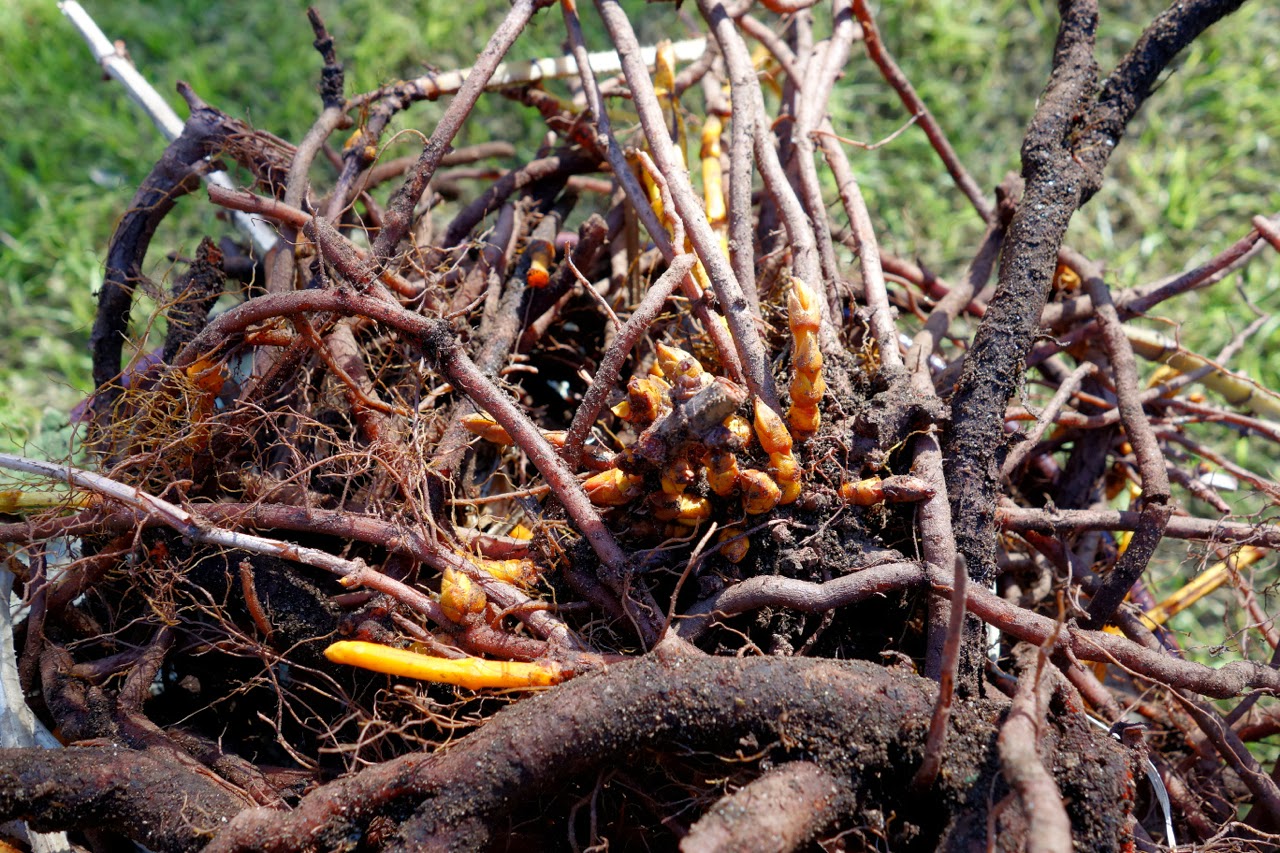 And after: gleamingly clean and beautifully orange. What a transformation!  I just plunged the whole pile in a bucket of water, grabbed a small handful of roots at a time, and rubbed them clean with my hands. They were beautiful in that late-afternoon Arizona sun. 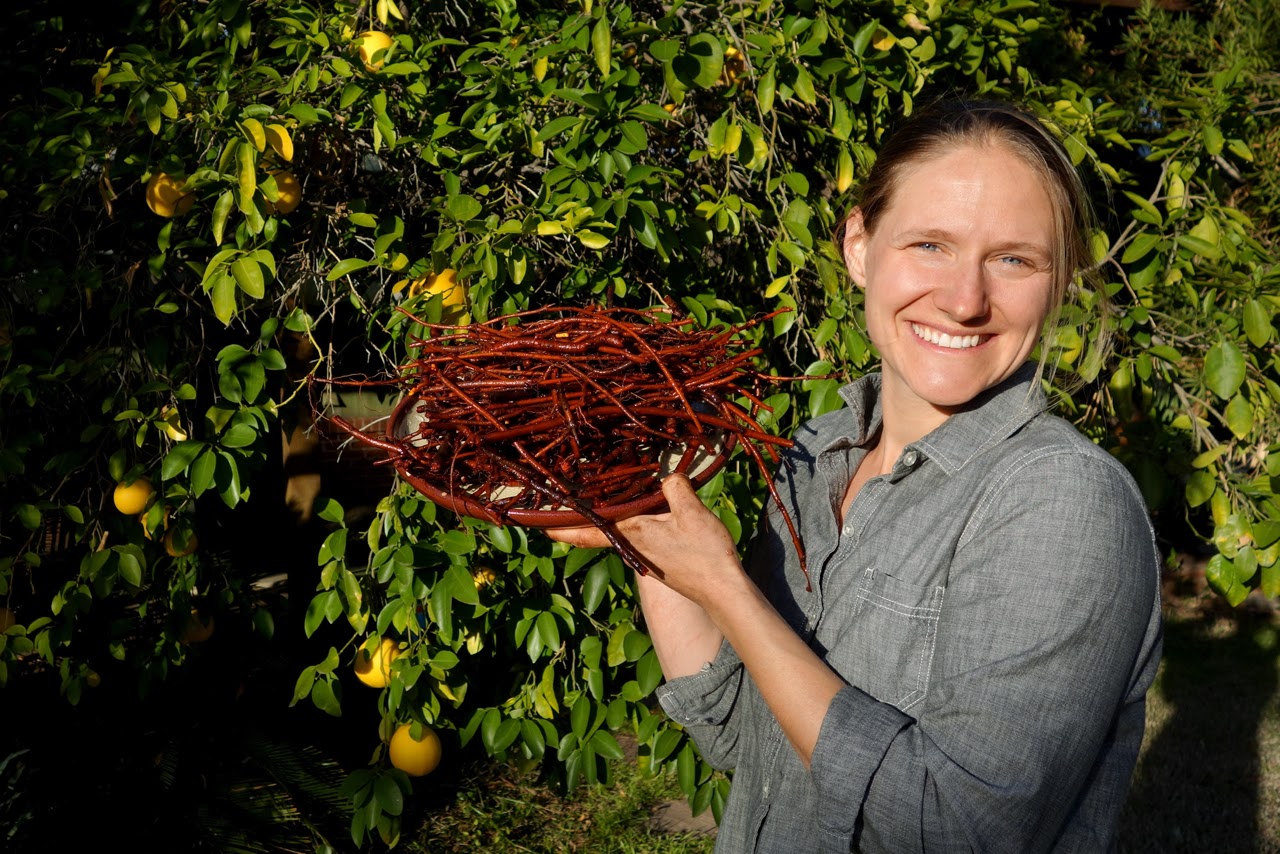 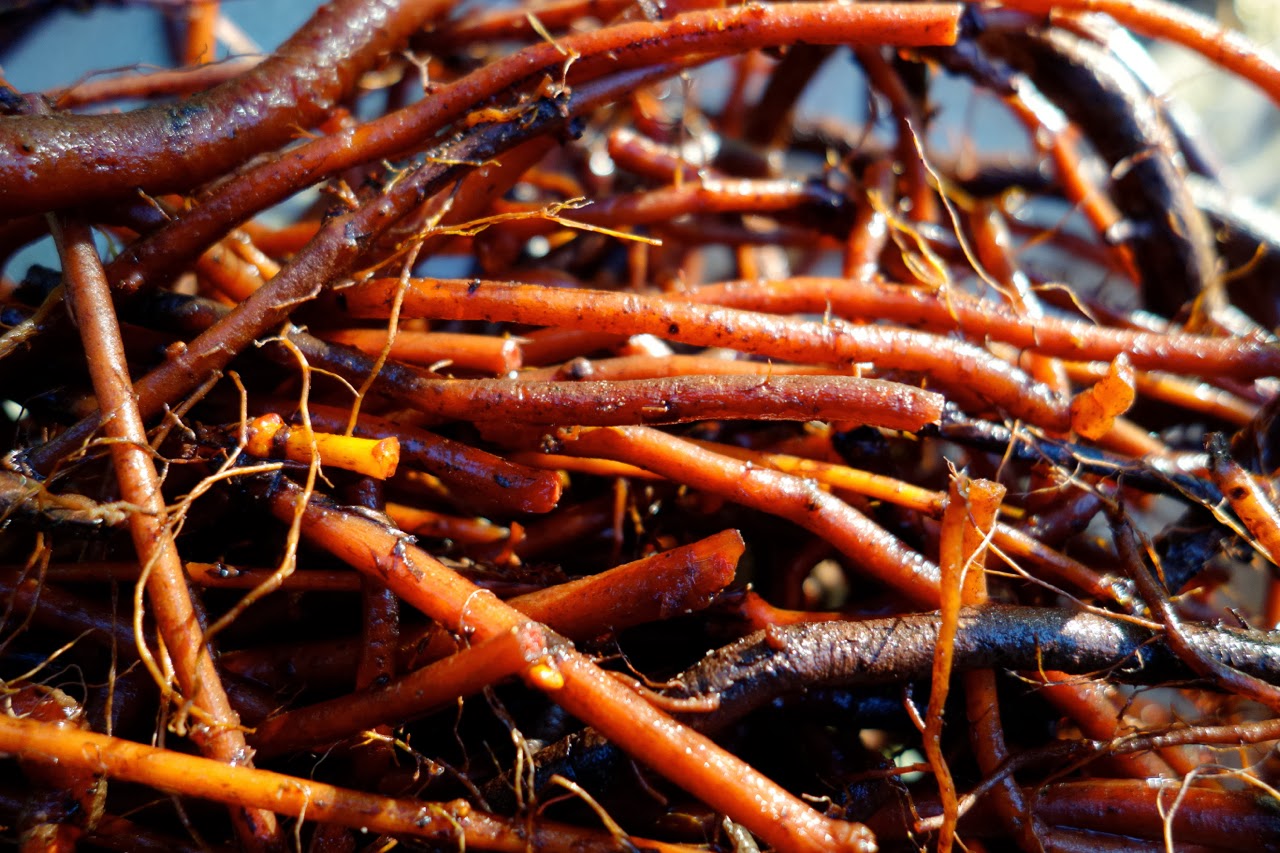 As for the madder plant, it's going to bounce back in no time. I pulled out all the sizable roots in the center of the barrel, but I left plenty of small roots and shoots around the barrel's edge.  Madder sends out tons of runners, and there were little plants coming out through cracks at the bottom, too.  Since we had a mild winter here the plants are already getting ready to grow, grow, grow! 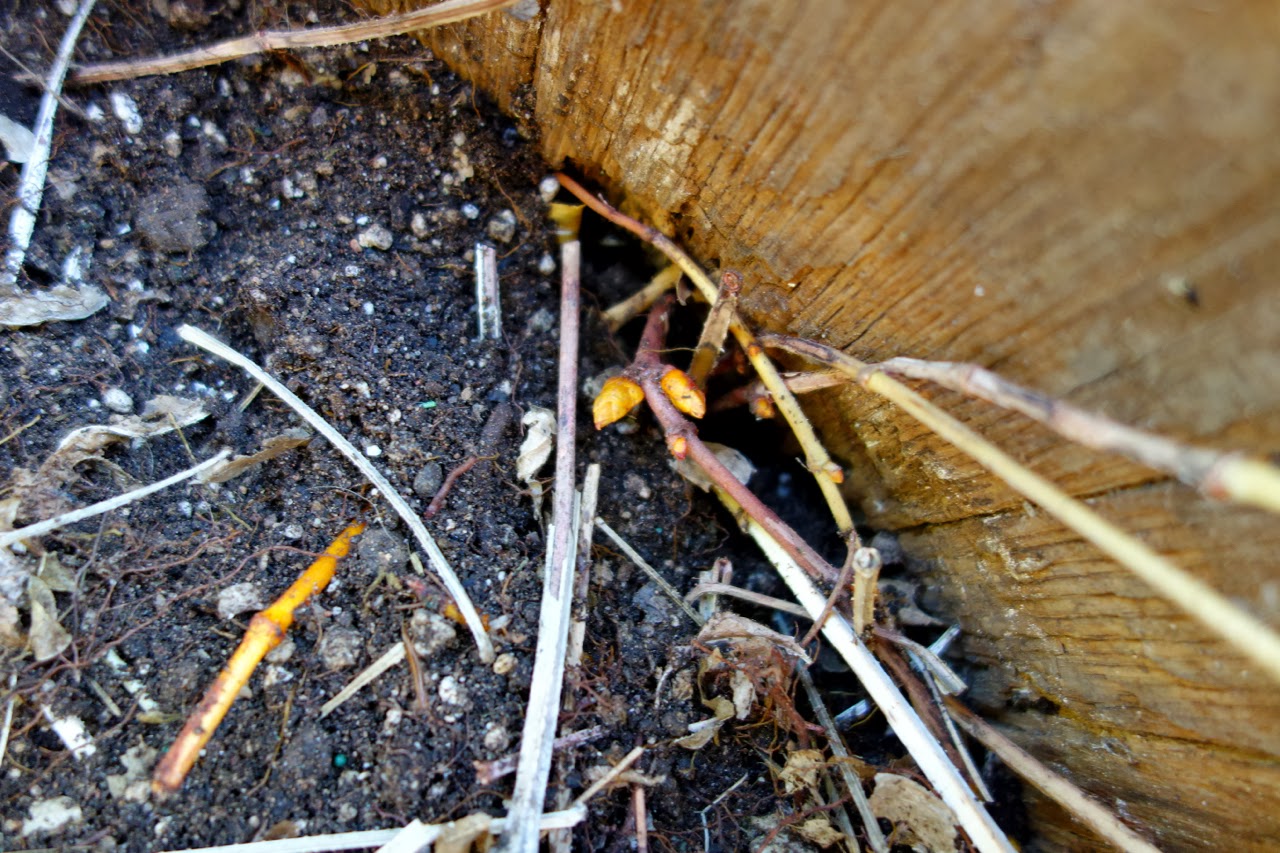 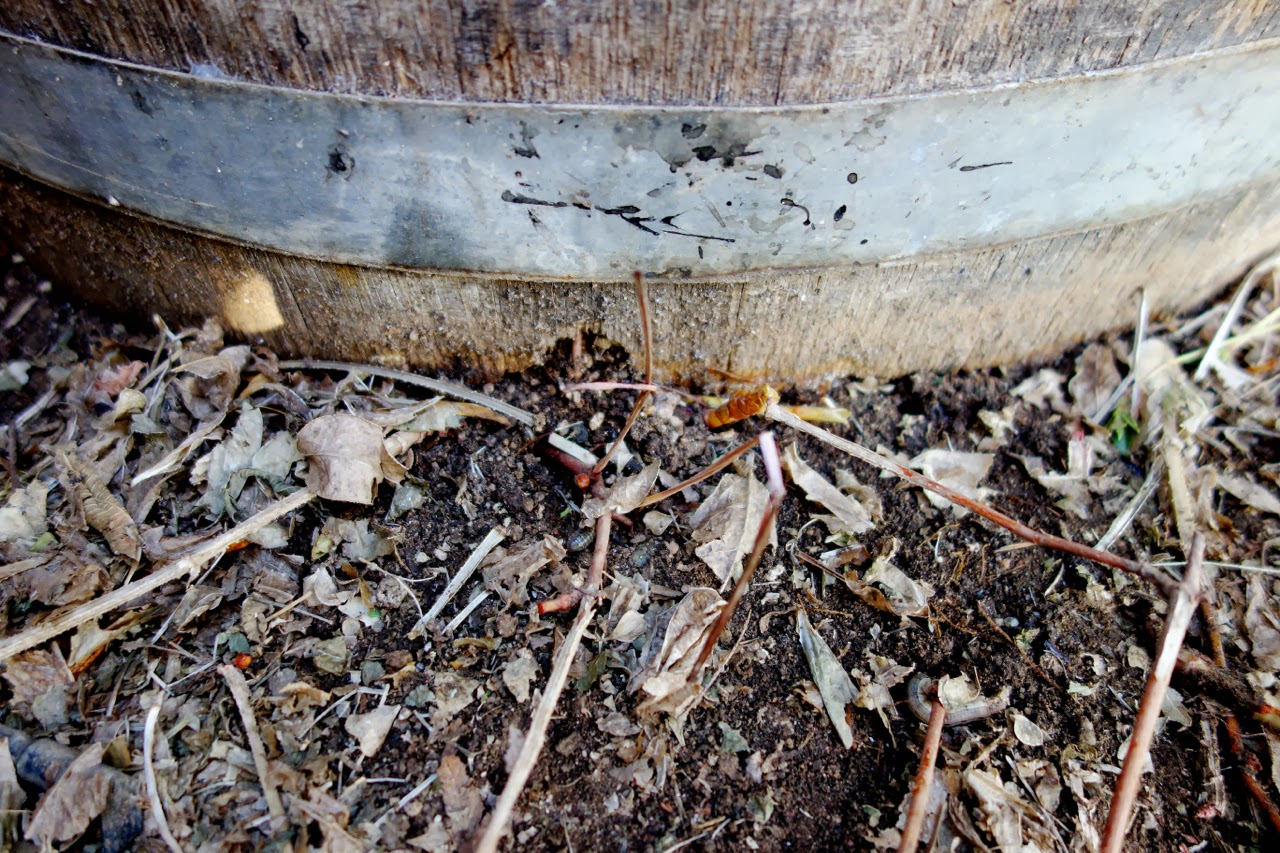 Next up, some initial dye tests with the roots! Stay tuned.

Lovely! Thanks for sharing, Hanna. I too love the color from madder - those freshly scrubbed roots are so enticing! But living in the northeast, I won't be seeing plants any too soon. Hope you share photos of the dye pot and dyed yarns.

I definitely will! It's an experiment that's going to be unfolding over the next couple of months, but I'll keep posting the progress ....

How Cool! Can't wait to see your dying results!

Looking forward to seeing the results! :)

That was an amazing transformation! I can't wait to see what you dye with your freshly dug roots!

thanks for posting. I have some madder that is about three or four years old. I was wondering when to harvest and how. Figured Id look it up. But, this gives me the idea.

Hi Hanna.Just a question.Do you live in South Africa?.I am desperately looking for madder root "Rubia Tinctorum" seeds or roots or small plants and also "Indigo tinctoria" but just cant find any in SA.I did try to order from Europ but our non functioning postal service ???.my email address is joejoubert@fastmail.fm if you do have any information where I can get some of these seeds or plants in South Africa.
Regards Joe

Joe Joubert. Rubia Tinctorum is available from MOUNTAIN HERB ESTATE in Hartbeespoort area. They do ship to most of South Africa.